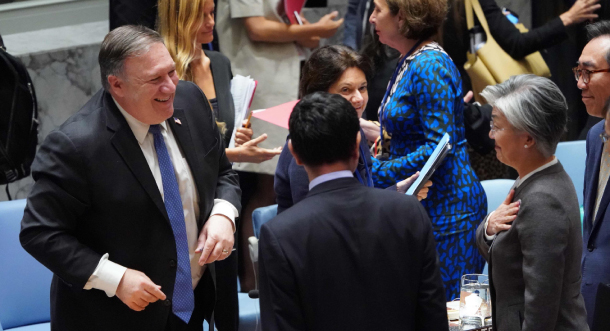 U.S. Secretary of State Mike Pompeo said Thursday in New York that the world is reaching “the dawn of a new day” on North Korea’s nuclear and ballistic missile programs, but stressed that sanctions must remain in place until the regime’s denuclearization is complete and verified.

Pompeo made the remarks as he chaired a special session at the United Nations Security Council about North Korea and non-proliferation on the sidelines of the UN General Assembly.

Pompeo, who plans to make a fourth visit to Pyongyang next month to iron out the details for a second summit between U.S. President Donald Trump and North Korean leader Kim Jong-un, credited the Council’s sanctions for the flurry of diplomatic improvements with the North this year.

“The path to peace and a brighter future is only through diplomacy and only denuclearization,” he said. “That means any other path North Korea may choose will inevitably lead to ever-increasing isolation and pressure.”

The top U.S. envoy continued that enforcement of UN Security Council sanctions must continue “vigorously and without fail” until North Korea’s full, final and verified denuclearization.

Without naming any names, Pompeo urged the international community to abide by UN Security Council Resolution 2397, which lowered the annual cap on refined petroleum imports to North Korea, saying the United States has assessed “in no uncertain terms” that the cap of 500,000 barrels has been breached this year.

Pompeo added that the U.S. was “troubled” by recent reports that UN member states, including members of the Council, apparently referring to Russia and China, were accepting more North Korean laborers, which is a violation of Resolution 2375.

“We are well into a diplomatic process and we hope - indeed, we want - to see this through to a successful end,” he said.

South Korean Foreign Minister Kang Kyung-wha urged the Council in the same meeting to support upcoming talks between the United States and North Korea so that they can produce “more concrete outcomes.” She did not specify what results Seoul is looking for from the talks.

Kang said South Korea is committed to enforcing international sanctions against the North, even as it continues to engage with the regime to work toward complete denuclearization. What eventually brought North Korea back to the discussion table, she said, was a “well-measured combination of diplomatic tools” - sanctions in response to the North’s nuclear and missile provocations, but an open door to dialogue if Pyongyang wanted to negotiate.

Russia and China, on the other hand, called for sanctions on the North to be eased to reward the progress made so far in talks, adding that relief would allow the regime move further towards denuclearization. Both countries also said they supported the South and North’s wish to declare an end to the 1950-53 Korean War, which ended in an armistice, not a peace treaty. The United States has balked at such a declaration without concrete denuclearization progress by North Korea.