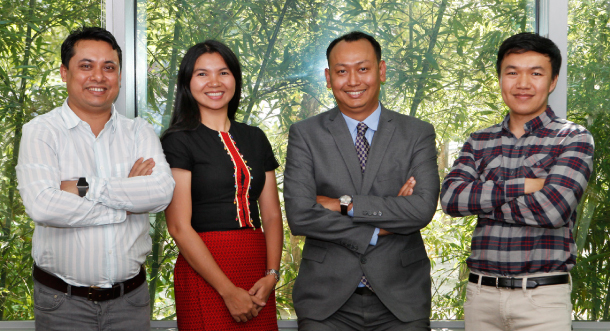 A group of democracy advocates from Myanmar visiting Korea said that the persecution of the Rohingya minority is just one of the many issues the country needs to solve.

“As a humanitarian worker, I was in Rakhine State visiting the camps there, and for me it is very clear that no one should live in that condition,” said Htet Htet Oo, humanitarian reports and communications officer at the UN. “What’s happening to the Rohingya - people think that it started in 2012, but it’s been rooted for so many years.”

Rohingya Muslims in Burma, who are not officially recognized as an ethnic group by the Burmese government, face persecution and violence. More than 700,000 Rohingya refugees were forced leave their homes last year, according to the UN.

“It’s not just about the rights issues,” she said. “There have been immigration issues, poverty in Rakhine State has been severe, it is the second poorest state in the country, infrastructure and education levels are quite low - these issues are very complicated.”

Htet Htet Oo is one of 21 young Burmese advocates for democracy and human rights who partook in the Texas-based George W. Bush Presidential Center’s Liberty and Leadership Forum, a program that was established in 2014.

It has since trained 56 young Burmese, including members of parliament, journalists and even former political prisoners who are vying to become the next leaders of the country.

“Right now, all of the international assistance is directed to Rakhine, while there are needs across the country,” said Myo Myint Aung, project director of the Mekong Regional Program of PATH, a U.S.-based international health nonprofit. “Getting need to the area is fine, but we cannot live on international assistance for long. We have to graduate and be self-sufficient. There will be a switch that we need to make.”

A group of Bush Institute alumni visited Korea last week to learn about Korea’s own history of grappling with democratic values and progress.

“We found out how during the IMF crisis individuals contributed to the society,” said Aung Kyaw Moe, director of the Center for Social Integrity, a nongovernmental organization in Myanmar that promotes diversity, pluralism and inclusion through various training programs for young Burmese.

“We started to discuss amongst ourselves how much individuals can do for Myanmar. It is admirable, the way of collectiveness and solidarity the Korean people showed.”

“This is my personal opinion, but I think because we have different ethnic groups in the country whose rights have been neglected for such a long time, some Burmese people may think they do not belong to the country,” said Htet Htet Oo. “This type of frustration seems to be getting bigger. I really admire how people came together here in Korea to do things that the government cannot do alone.”

Daw Aung Sang Suu Kyi, an iconic democratic leader and current leader of the government in Myanmar, was recently criticized for a comment about two Reuters journalists jailed for investigating the killing of Rohingya villagers in Rakhine State.

“They were not jailed because they were journalists,” Suu Kyi said at the World Economic Forum in Hanoi on Sept. 13. “They were jailed because... the court has decided that they have broken the Official Secrets Act.”

Some Burmese alums of the Bush Institute’s leadership program said that international criticism of Suu Kyi may be unfair.

“I am very sad that the freedom of press in Myanmar may be going down,” said Yan Htaik Seng, a media development journalist for BBC Media Action.

“But the current criticism from the international media [of Aung San Suu Kyi] is unfair. Because the court made the judgment and if she were to intervene and order the release of the journalists, will she be different from any dictator we had before?”

“We have very high hopes for Aung Sang Suu Kyi but things work very slowly in a country that has been in a big crisis for 60 years,” said Htet Htet Oo. “All of that cannot be fixed in five years. We have big hopes but we also have to see what each one of us can do for the country.”

“It was a shock to hear in detail what she said, because the right to information is the very value of democracy,” said Aung Kyaw Moe.

The institute’s leadership program focuses on the individual’s potential. Aung Kyaw Moe founded the Center for Social Integrity through a project at the Bush Institute. His case is unique, as he is a Rohingya with Burmese citizenship. His organization is one of the few humanitarian assistance organizations operating on the ground in Rakhine, according to the institute.

Through his participation in the institute’s program, Aung Kyaw Moe said he acquired training that prepared him for his work, and also gained a new perspective on his own country.

“I was not expecting people to be that progressive. I didn’t know this kind of group existed in Myanmar,” he said in an interview with the institute.

“They were advocating for Rohingya human rights on behalf of me. You don’t see this kind of advocacy for minority rights. It was something very much extraordinary that I saw in the people who participated in LLF [Liberty and Leadership Forum].”