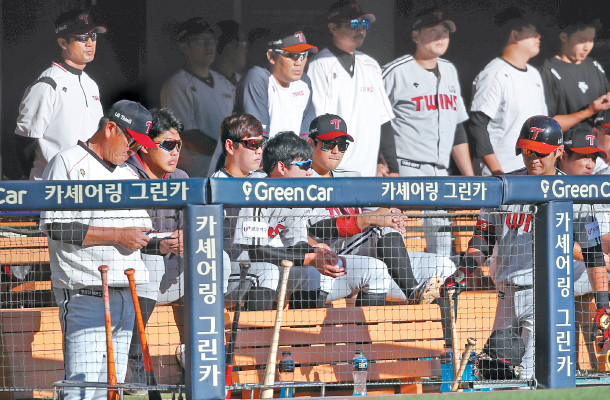 LG Twins players and coaches sit in the dugout at the top of ninth inning during a game against the Doosan Bears at Jamsil Baseball Stadium in southern Seoul on Sunday. [YONHAP]

With another 7-1 loss to the Doosan Bears at Jamsil Baseball Stadium in southern Seoul, the LG Twins not only lost their hopes of getting into the postseason but also extended their losing streak against the Bears to 15 games.

As the Bears have already won the regular season, manager Kim Tae-hyung excluded the cleanup trio of Kim Jae-hwan, Yang Eui-ji and Oh Jae-il from the lineup but the Twins still couldn’t do much against the Bears.

Choi Joo-hwan, who appeared as a cleanup hitter instead of Kim Jae-hwan, led the team to a quick start in the first inning with a two-run home run. The Twins’ Adonis Garcia hit a solo home run at the top of the seventh inning to help the team avoid a shutout loss but that was it for the Twins.

Since both the Twins and the Bears use Jamsil Baseball Stadium as their home, they’ve been long-time rivals and famously hold a three-game Jamsil derby every year on Children’s Day weekend.

The Lotte Giants hold the record for most consecutive losses against a single team - the squad fell to the Kia Tigers in 18 consecutive games from Sept. 27, 2002 to Sept. 13, 2003.

With one more game remaining against the Bears this season, the Twins may very well catch up to the Giants if they lose. Although the Giants hold the record for the longest losing streak, the Twins are the only team to ever post a 0.000 winning percentage against a specific team in a single season.

With only four games remaining in the season, it is unlikely that the Twins will clinch the wildcard spot in the playoffs. Currently, the Kia Tigers are fifth with 11 games remaining. Even if the Twins win all four of their remaining games, they will have to wait to see how to the Tigers perform.

This season, it is not an exaggeration to say that the Twins failed to advance to the postseason because of the Bears. If the Twins won at least half of the games, they could have easily secured fifth place and possibly competed for fourth. Whenever the Twins were on a winning streak, it was quickly ended when they played the Bears.

After the Twins wrapped a three-game series against the Bears with three losses on July 31, the team suffered an eight-game losing streak. Then, right when the Twins seemed to have recovered, the Twins played the Bears again on Sept. 21. Due to their two losses against the Bears in that series, the Twins missed out on their postseason spot and with another loss on Sunday, the Twins have dropped all the way to eighth.

While the Twins extended their disappointing record, the Bears have gotten themselves closer to setting their own record, becoming the third KBO team to reach 90 wins in a single season. With a W on Sunday, the Bears picked up their 89th win of the season. If the Bears add four more wins over the final seven games of the regular season, they will exceed the league’s record of most wins in a single season, 93, which was set by the Bears in 2016.

The Twins will play their last game against the Bears this season on Oct. 6.