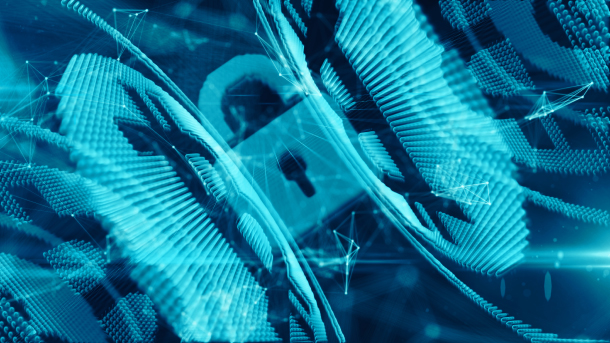 Gone are the days of Kakao and Naver competition in mobile messenger apps - KakaoTalk versus Line. The second round is set to begin - with cryptocurrencies on the back of proprietary blockchain technologies. 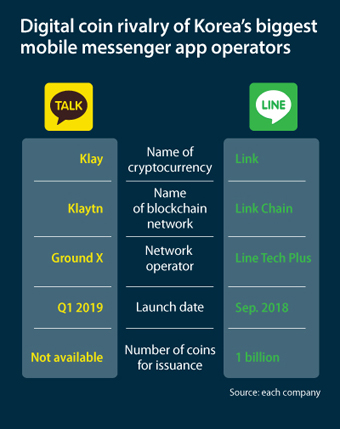 Ground X, a blockchain arm of Kakao, said earlier September it would launch a blockchain platform called Klaytn in the first quarter next year and distribute crypto coins called Klay to those who use the platform as a reward for using KakaoTalk and other apps connected to the messenger. The test version of the blockchain will be unveiled next month, and Kakao has yet to disclose exactly what features the coins will have. Industry observers say they will mainly work within the Kakao app ecosystem - usable for buying emoticons, mobile gifts and subscriptions to a music streaming service.

Blockchain is a digital ledger system that uses cryptographic techniques to generate a transparent and unchangeable record of transactions. It is seen as promising technology for applications as diverse as voting systems, inventory management and document authentication.

In late August, Line, a Japanese subsidiary of Naver, announced it would gradually issue 1 billion digital tokens called Link using its Link Chain blockchain network starting in September. The system will be run by Naver’s Singapore-based cryptocurrency exchange, Bitbox. Line Tech Plus, the subsidiary that operates the exchange, will manage 200 million of the tokens. Link only trades within Bixbox, so Naver contends the currency is expected to avoid the dizzying value swings of other crypto coins. (Bitcoin, the largest cryptocurrency, has tumbled 65 percent since its peak late last year after a dizzying ride.) Customers in the United States and Japan are not able to use the new coins because of licensing requirements.

“Unlike other cryptocurrencies or digital tokens, Link will not make an initial coin offering, but instead utilizes a reward system that gives users Link as compensation for using certain services within the Line ecosystem,” a Line statement said. Those rewards will go to users of certain features on the Line chat app as well as some open-source decentralized apps Line is preparing to launch - including those developed by third parties - in the near future. They can be used to pay for music, videos and webtoons as well as for in-app payments and in-game trading and can be traded at Bixbox.

Cryptocurrencies have passed the stage of being the hottest investment destination in Korea, once the most robust investing and trading market for digital currencies, after the government began cracking down in the wake of hacking attacks on exchanges. The regulators here still operate with a heavy hand.

Regardless, the two chat app giants, which originated from Korea’s two biggest portal sites and search engines dating back to the late 1990s, are bracing for the future with a now-suspect asset. The main goal of the project, however, does not lie with coins themselves, but with the blockchain.

“When you well combine the powerful user groups of Kakao with blockchain world,” said Han Jae-sun, CEO of Ground X, at a developer conference on Sept. 13 at a convention center in Jeju, “you can build an effective blockchain ecosystem.”

He said coins have two main desired functions - usability and exchangeability - and companies should think carefully about how to distinguish the two.

“Normal users would not buy and sell 5,000 won [$4.50] worth of coins; rather, they want to buy goods that are worth a certain amount of money,” he said. “Coins have such high price fluctuations that using them in real life isn’t easy.”

He added that more apps for general users are coming out to revitalize the blockchain ecosystem.

“Blockchain is set to become a launching pad for business expansion in the global arena,” said Han. “Once a business is established like we are, it will inevitably think hard about the next step. Blockchain can potentially be a great weapon when creating a new market.”

No one in the industry can guarantee how successful the coins from Kakao and Line will be. Skeptics say they can barely compete against already established and frequently used tokens such as Ethereum or Bitcoin.

“Cryptocurrency is cryptocurrency, and we do not know yet how far commercially valuable coins are going to be,” said a Line spokesman. “What really counts is blockchain. Building the blockchain ecosystem is crucial for our future.”

Blockchain also touts the advantage of saving time and cost for Kakao and Line, which increasingly capitalize on content - webtoons, music and emoticons based on their own animated characters. If the content is developed and distributed on their own blockchain infrastructure, they won’t need third-party developers and won’t have to pay extra commissions and spend time transmitting massive amounts of data to storage.

Regulators outside of Korea also remain wary, but the potential of cryptocurrencies for businesses and private investors is a seductive tool for tech companies that pursue blockchain technologies. Many companies are slowly changing their stance on cryptocurrencies, returning to the game.

In June, Facebook began allowing preapproved crypto-related advertising and Google followed suit at the end of September to reverse its ban, making it possible for regulated crypto exchanges to buy ads in the United States and Japan starting this month. The two platforms earlier restricted the ads to protect consumers from fraud.