Tongyeong’s tears may yet turn to hope

Tongyeong’s tears may yet turn to hope

An aerial view of the defunct Shina SB Dockyard in Tongyeong, South Gyeongsang. The company, which once employed thousands, filed for bankruptcy in November 2015, unable to stay afloat amid the decline of Korea’s shipbuilding industry. [LH]

TONGYEONG, South Gyeongsang - Hyundai Heavy Industries moved the largest shipbuilding crane in Malmo, Sweden, across the world to Ulsan 15 years ago. Koreans were touched by the sadness of Malmo’s residents as their city’s main industry faded away, and called the crane’s move the Tears of Malmo.

Sweden once was a leader in the global shipbuilding industry. The Kockums Crane, 138 meters (453 feet) tall and weighing 1,600 tons, symbolized the strength of the nation’s industry in the southern city of Malmo. In 2003, the crane was sold to Hyundai Heavy Industries. Malmo residents wept for the loss of a local landmark and the symbolic death of their once-dominant industry. The Swedish shipbuilders lost out to their Korean competitors, unable to compete in price and labor costs.

In an ironic twist, that same crane now may be shipped off to China, the leading shipbuilding country of today. Hyundai Heavy decided to suspend production of offshore oil platforms, which the crane was used for, due to a dearth of orders. The Kockums Crane stopped operations on Aug. 25.

A similar tale of demise is now also echoing through the industrial city of Tongyeong, South Gyeongsang. The ending, though, might not be so bad.

In Tongyeong, a coastal city just south of Busan, another large crane sits at the defunct Shina SB Dockyard. The dockyard, once an employer of thousands, filed for bankruptcy in November 2015, unable to stay afloat amid the decline of the domestic shipbuilding industry since 2010.

After finalizing the purchase of the dockyard site in April following a successful bid, the Korea Land & Housing Corporation (LH) earned the right to redevelop the area. LH, a government-run body responsible for developing and managing cities, land and housing, is now planning to transform Tongyeong into a vibrant economy built on tourism and convert remnants of the shipbuilding past into major cultural attractions. 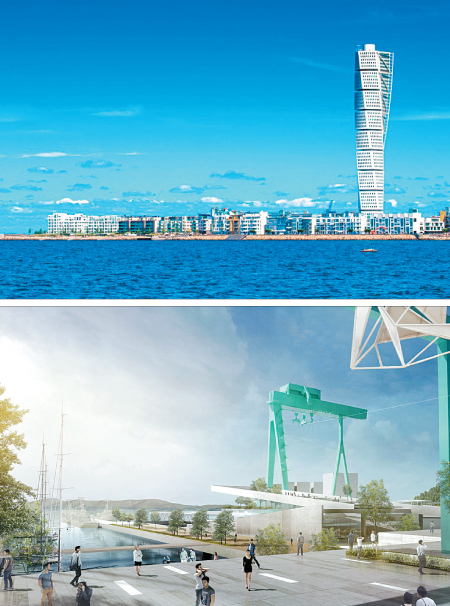 Top: The Turning Torso in Malmo, Sweden, is the tallest building in Scandinavia. It now stands where a bustling shipyard once operated. Above: The winning team in a competition to regenerate Tongyeong plans to revitalize the area while keeping the shipyard’s crane and docks intact. [LH]

The LH recognized that for Tongyeong residents, the goliath crane was not merely a piece of metal - it had been a regional landmark for half a century.

LH specializes in urban development. But for Tongyeong, it changed its strategy to pursue what it calls “regeneration,” instead.

President Moon Jae-in had set the implementation of the “Urban Regeneration New Deal” as one of his 100 policy tasks to fulfill during the five-year long administration. With the New Deal, his administration plans to spend 50 trillion won ($45 billion), or 10 trillion won every year, to redevelop infrastructure in areas facing social and economic decline.

Last December, the Ministry of Land, Infrastructure and Transport designated the Shina dockyard and the surrounding areas as a beneficiary of the Urban Regeneration New Deal.

LH, which is now in charge of revitalizing the region, has a total of 1.10 trillion won to spend toward regenerating the city, with investments coming from the government, LH, the city of Tongyeong and private investors.

It’s using Malmo, a city that also said goodbye to its flourishing shipbuilding industry, as a role model. Malmo is now a bustling hub of tourism, culture and renewable energy, where Turning Torso, the tallest building in Scandinavia, now stands less than 1 kilometer (0.62 miles) away from where the Kockums Crane once stood. To get some creative ideas for the city, LH co-hosted the International Urban Design Competition for the Regeneration of Tongyeong Dockyard with the Ministry of Land, Infrastructure and Transport in April.

The competition was taken seriously, as LH intended to implement the winning ideas in real life. It was only open to professionals, and participating teams were advised to be made up of least several individuals and companies that specialize in architecture, urban design, landscape architecture, real estate consulting and culture and tourism consulting.

The team that won first prize was a consortium of eight Korean and overseas architecture, consulting and design firms, including Posco A&C, a Posco affiliate that provides architectural services.

The team gave the dockyard the new name “Camp Mare” and came up with a plan to revitalize the area while keeping the crane and docks intact, which the competition required. In Camp Mare, the cranes and sliding docks will be reborn as harmonious components of a large open square.

“We can transform the dockyard into a great outdoor concert hall if we build a stage on the dock, which spans nearly 182 meters, and add some speakers to the crane,” said Cho Hee, a design manager at Posco A&C. “Our proposal suggested transforming the abandoned shipyard into an open square.”

A key goal LH has for Tongyeong is making the city sustainable, especially by creating jobs and attracting new residents.

Because the Shina SB Dockyard dominated Tongyeong’s economy since its establishment in 1946, its collapse sent shockwaves throughout the entire region. Some 5,000 shipyard workers immediately lost their jobs, and an additional 7,000 people working in related businesses were left unemployed. The winning team had jobs in mind in their plan for a new Tongyeong.

“Jobs took the front seat in our masterplan,” said Choi Do-in, a senior manager of Korean architecture firm Metaa, which is part of the team. “The foundations of manufacturing, especially related to shipbuilding, have all but crumbled in Tongyeong. So we made it our priority to use the city’s resources and potential to nurture the new industries of culture and tourism to attract people to Tongyeong and eventually make them stay.”

“The winning team proposed a solution to rejuvenate the city in a sustainable way by creating the dockyard site into a place where history, culture and nature can coexist,” said Shim Jae-ho, who led the competition judging.

The team’s 12 Schools Project is a plan to create 12 educational institutions focusing on different subjects, including music, tourism, crafts and shipbuilding. The project will foster new experts in these diverse fields in hopes of preparing them for new industries and jobs in the region.

“Cities are like giant organisms created by their human inhabitants, but they have limited resources and space,” said Lee Jae-yong, a senior manager at Siteplanning Architects, another member of the team.

“Though there is a start to urban regeneration, there is really no end, as the city is alive. We will help transform the dockyard site into the ‘light of Tongyeong,’ rather than leaving it to become Korea’s ‘tears of Malmo,’” Lee added.