Must-see works at the Gwangju Biennale: This year’s edition features artists touching on the borders that exist between everything

Must-see works at the Gwangju Biennale: This year’s edition features artists touching on the borders that exist between everything 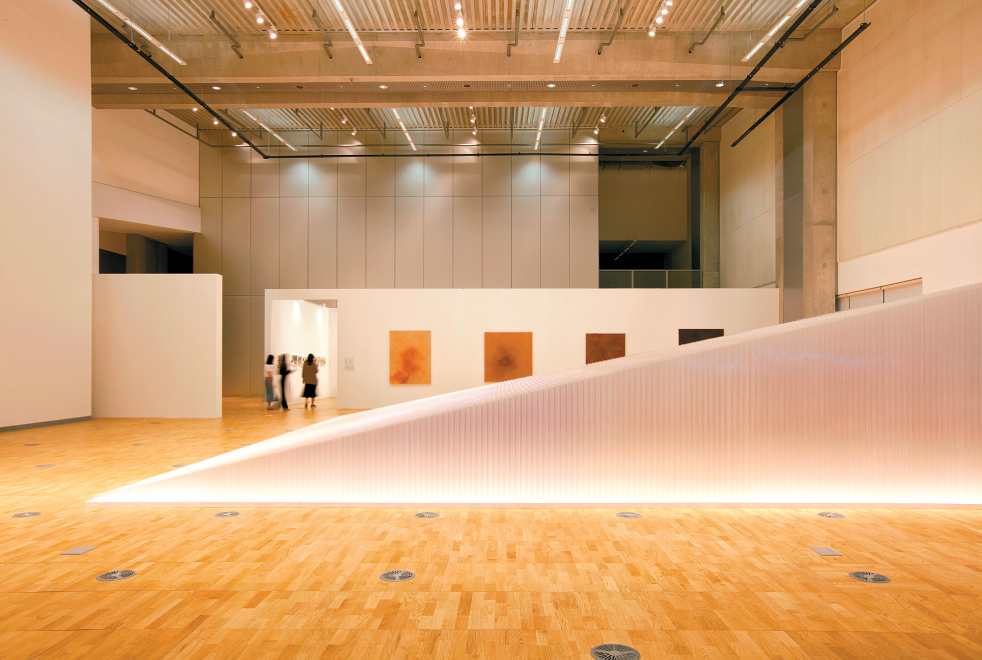 “Bruise” painting series by American artist Byron Kim is seen over the gigantic sculpture “Untitled” by American artist Tara Donovan in the “Faultlines” exhibition in the Asia Culture Center. The show is one of the seven exhibitions making up the 12th Gwangju Biennale which runs through Nov. 11 in the southwestern city. [GWANGJU BIENNALE]

GWANGJU - The 12th Gwangju Biennale (GB), one of the world’s major art biennials, is now in its middle phase. Under the multiple curator system introduced by Sunjung Kim, president of the Gwangju Biennale Foundation, 11 curators on seven teams have created seven exhibitions, with a total of 163 artists from 42 countries participating. The event is being held at the Gwangju Biennale Exhibition Hall, the Asia Culture Center (ACC) and other venues throughout the city.

Reactions are mixed. Many critics complain that the biennale is too vast and unfocused, while being too loosely tied to the theme “Imagined Borders,” a reference to the theme of Gwangju’s inaugural Biennale in 1995, “Beyond the Borders,” as well as political scientist Benedict Anderson’s term “Imagined Communities.” The quality gap between the exhibitions is also wide, they say.

But others say some of the exhibitions are very attractive and there are more works to see than ever because the exhibition is bigger than before. To help viewers, the Korea JoongAng Daily has picked ten must-see works.

The installation work was inspired by a Moroccan writer’s novel “Agadir,” which unfolds discussions among diverse fictional characters about how and in what form to reconstruct the Moroccan city of Agadir after the 1960 earthquake, according to the artist.

“The architectural issue is ultimately linked to the post-colonial issue of the identity of the city which went through modernization, accompanied with colonization by the West and then liberation,” said Kim, curator at Tate Modern in London. The issue is also touched upon by other works in the “Imagined Nations/Modern Utopia” show.

Barrada created an installation work that consists of furniture-like sculptures she made using traditional Moroccan wicker techniques; scratch-drawings of Brutalist buildings set up after the earthquake and collages of news stories about the earthquake.

“Cities for the Future” by Shezad Dawood (The United Kingdom)

The work, comprised of neon sculptures and geometric paintings on textiles, was inspired by Le Corbusier’s master plan for the Indian city of Chandigarh and explores interactions between Eastern and Western art.

“You could say this as intervention of European Modernism in India, but if you look at the bigger picture, there is an obvious thread of mystic geometry originating in the Indian subcontinent that could be said to pervade European Modernism,” Dawood said at a GB press preview last month.

In this art project, 100 people each from various cities in India, Korea, Italy, Israel and others were invited to make a hand-drawn map of their country. The results - the overlapped hand-drawn maps of Korea and other countries - are now hanging in Gwangju Biennale Hall.

The seemingly-simple project is meaningful because it reveals people’s collective knowledge and unconsciousness about the geopolitics, history and identity of their country. The overlapped hand-drawn maps of “my country” by South Koreans show the whole Korean peninsula with the truce line being clear but not so much distinct as the coastlines of the peninsula. It reveals that most South Koreans think not only of South Korea, but the whole Korean Peninsula, as part of “my country” - although they recognize the division of the two Koreas.

The short film “Space Refugee” by Altindere, who has frequently dealt with marginalized communities and refugees, is a mockumentary that features a real Syrian refugee who was an astronaut and sarcastically explores the idea, “If no one wants to take Syrian refugees on Earth, why don’t we send them to Mars?”

“At the end of the Cold War, there was positive sentiment about going beyond the nation-state: the world seemed to open to refugees and immigrants. Today though, the world seems to have pivoted to the opposite direction,” said Gaweewong, artistic director of Jim Thompson Art Center in Bangkok.

From “The Ends: The Politics of Participation in the Post-Internet Age” curated by Rita Gonzalez and Christine Y. Kim (Gwangju Biennale Exhibition Hall)

These artists collaborated to arrange archives and videos about the unique media of Cuba called “El Paquete Semanal.” This one-terabyte hard drive filled with content, including Western films and television shows, is updated weekly and shared physically among Cubans, 70 percent of whom don’t have internet access.

“We will see not only globalization but also political blockage, breaks and dead ends in the internet era and artists’ exploration into these and their discussions about alternative digital platforms and the potential end of the internet,” said Kim, curator at the Los Angeles County Museum of Art (Lacma).

“Para Olivier (In Order to Forget)” by Kcho (Cuba)

From “Faultlines” curated by Chung Yeon-shim and Yeewan Koon (ACC)

“In collaboration with David Teh, curator of the “Returns” exhibition about the archives of the GB, we present again Kcho’s work, which won the Grand Jury Prize in the inaugural GB in 1995,” Chung, art historian and professor at Hongik University, said. “Now, after more than 20 years, the work has a new meaning to viewers, because of the new context.”

Kcho’s old boat on a pile of beer bottles, inspired by Cuban exiles, seemed to show not only danger and anxiety but also a tinge of hope and transcendence in 1995.

But now, in the era of neo-isolationism and cracking globalism, the work looks like a drifting boat of refugees without welcoming people and without hope.

The paintings look just like abstract paintings of soft tones but they actually depict bruised human skin, inspired by Carl Phillips’s poem about his encounter with a bruise on his lover’s skin.

“Many people feel the paintings are lyrical but there have been also sociopolitical interpretations,” Chung said. Kim has created paintings that blur the border between abstract and representational art, sometimes with sociopolitical suggestions such as racial prejudice.

It will be better to say the exhibition is, in fact, three separate shows respectively curated by the three. The exhibitions, which feature mainly South Korean artists’ works, vary in quality of curation - none of the shows are very related to the 2018 Gwangju Biennale’s theme of “Imagined Borders.”

Some works will attract the viewers’ eyes. Among them are a series of meditative photos by Chung, which capture the ruins of the former Armed Forces’ Gwangju Hospital.

And Min’s works, which are elaborately made sculptures of bird heads and junk, will remind the viewers of dark fairy tales.

“Youth Storm Troopers,” by Yun Gon and others (North Korea)

This 5-meter-wide (16.4 feet) painting that depicts young workers at a construction site is the biggest among the North Korean collective paintings shown in South Korea for the first time at this exhibition. They were produced by a group of artists at the Mansudae Art Studio in Pyongyang.

“Each of the workers in this painting looks happy and is smiling, creating contrast with their conditions of hard working,” said Muhn, artist and professor at Georgetown University. “[These are] the characteristics of North Korean paintings.”

Some viewers might think the paintings are no more than propaganda with the conventional style of socialist realism, while others might feel seeing such a literal painting in the flood of conceptual art is a refreshing experience. 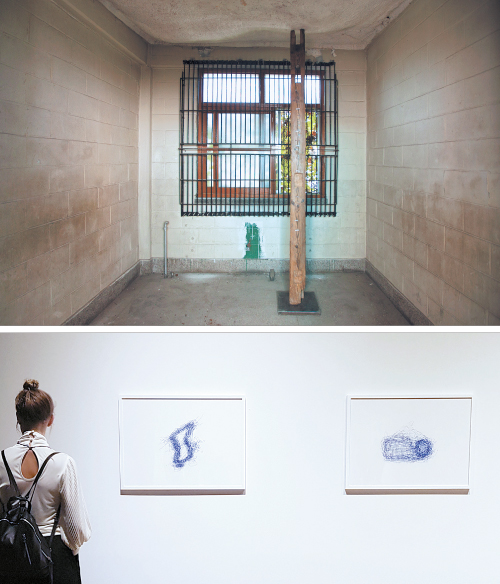 From GB Commissions at the former Armed Forces’ Gwangju Hospital

Attia has installed old timbers in several patients’ rooms of the abandoned hospital. The timbers, standing calmly, will remind the viewers of human beings full of trauma and will remind them of the hospital’s history in relation to the 1980 Gwangju Massacre.

Apichatpong presents quietly-moving installations such as billiard balls automatically rolling and videos appearing between the ruins of a fallen roof. They arouse memories in the abandoned hospital.


The biennale wraps up on Nov. 11. For details, visit www.gwangjubiennale.org.