Exports dip in Sept. but look strong for year

Exports dip in Sept. but look strong for year 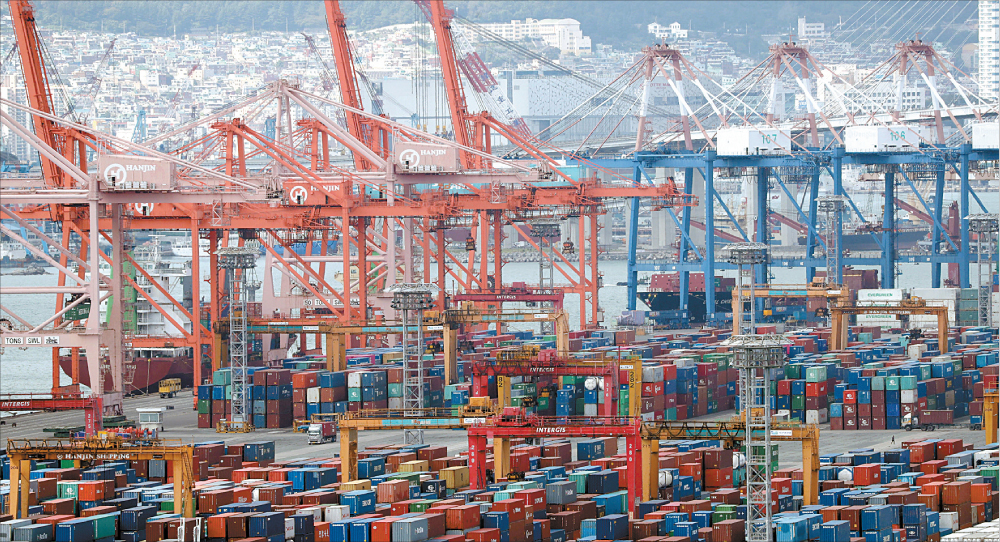 Containers are stacked at the Port of Busan on Monday. [YONHAP]

Korea’s export fell 8.2 percent in September compared to a year earlier, largely due to the Chuseok holidays, which were in October last year.

The good news was that Korea’s exports stayed above the $50 billion mark for the fifth consecutive month. If exports continue at their current rate, they could reach an annual record of $600 billion by the end of the year.

According to the Ministry of Trade, Industry and Energy on Monday, Korea’s exports last month amounted to $50.6 billion, a drop from $55.1 billion recorded a year earlier.

The ministry said one of the main contributors were September’s 19.5 working days, four days fewer than the same month last year.

“Since October, we expect export growth to maintain an average 5 percent increase,” said Trade, Industry and Energy Minister Sung Yun-mo. “[If so] exports will exceed $600 billion for the first time this year.”

In the first nine months, Korea’s exports amounted to $450.4 billion, which was a 4.7 percent increase from the previous year and an all-time record for the same period.

Imports fell 2.1 percent during the same period to $40.8 billion, contributing to 80 consecutive months of trade surpluses. The trade surplus in the first nine months was $9.8 billion.

Other items that saw rises last month were petroleum goods, which grew 13.5 percent to $4.1 billion, and computers, which increased 5.7 percent to $959 billion.

Computer parts have been enjoying growth over the last 18 consecutive months with the growth in cloud servers.

However, the ministry remained cautious about protectionism, intensifying global competition and an increase in Korean companies relocating plants overseas.

Another worrying factor is Korea’s heavy dependence on semiconductor exports.

Semiconductors currently account for a quarter of Korea’s exports.

In recent months, semiconductor growth has been slowing. Export growth for semiconductors, which was 53.3 percent in January, fell to the 30 percent range in June and below 30 percent last month. Prices of dynamic random-access and NAND memory chips have been falling.

More alarming, growth in other major categories has turned negative, including mobile telecommunication devices (which includes smartphones), automobiles, consumer electronics as well as steel and ships.