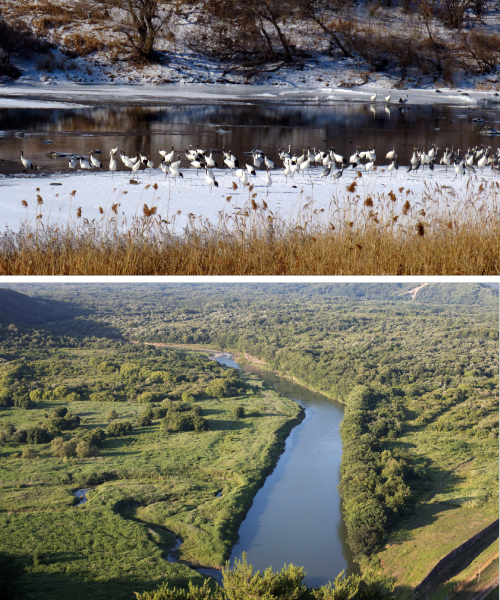 Top: Hundreds of cranes spend the winter at the Imjin River in Yeoncheon County, Gyeonggi, in February. Above: The Hantan River flows through the demilitarized zone in Cheorwon County, Gangwon, in August. [JOONGANG ILBO]

Korea is pushing the United Nations Educational, Scientific and Cultural Organization (Unesco) to designate regions bordering the demilitarized zone (DMZ) and the whole of Jeju Island as biosphere reserves.

On Monday, the Ministry of Environment and the Korea National Park Service’s Unesco Man and the Biosphere Programme National Committee announced that it had nominated three sites to Unesco for designation as biosphere reserves last Friday.

The ministry and committee are pushing for the northern regions of five counties in Gangwon - Cheorwon, Hwacheon, Yanggu, Inje and Goseong - to be designated as one biosphere reserve.

These five counties, along with Yeoncheon County in Gyeonggi, another nominated site, all border the DMZ, which is famous for its flourishing wildlife due to decades-long isolation from humans.

Additionally, the government is pushing for all of Jeju Island to be recognized as a biosphere reserve. Currently, only the area immediately surrounding Mount Halla is designated as a Unesco biosphere reserve.

Unesco will make a decision on the three sites’ nominations next June.

“By nominating sites that border the DMZ as biosphere reserves, I hope we will have more opportunities for North-South environmental cooperation to preserve and manage the areas together,” said Yoo Seung-gwang, head of the ministry’s nature and ecology policy division.