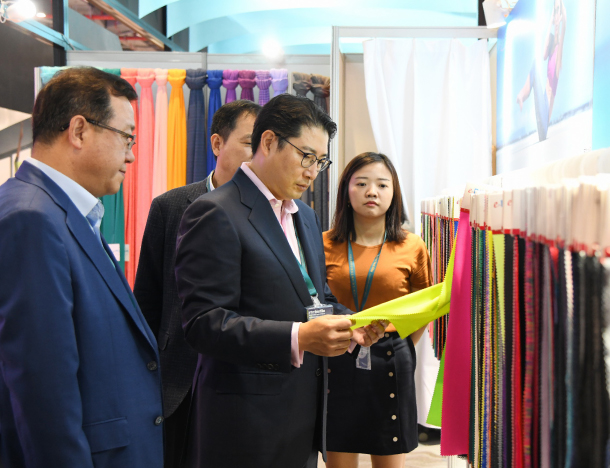 China is an important market to Hyosung considering its size and rapid growth. Market tracker Euromonitor estimated China’s apparels market at about 300 trillion won ($270 billion) as of the end of 2016, and it is growing at an average of 5 percent annually.

Cho met with representatives of China’s top innerwear and apparels brands, including Maniform, Anta and Yishon, during the event to bolster partnerships.

“The best way to understand consumer needs is to be on the spot,” Cho said.

In addition to cementing partnerships with local players, Hyosung TNC, the group’s apparel fabric maker, showed off its textiles at the three-day exhibition. The company is the world’s top player in the spandex market. Spandex is a synthetic fiber used mostly in stockings and swimsuits for its elasticity.

One of the notable products the textile company introduced was clothing woven with yarn made out of recycled plastic bottles. This is part of Hyosung’s efforts to develop sustainable fashion, according to the company. Cho’s visit to China doesn’t come as a surprise, as he has been traveling around the world starting earlier this year.

In February, he traveled to Vietnam to meet with Prime Minister Nguyen Xuan Phuc to discuss potential business opportunities in Vietnam, where rapid economic growth has created a need to upgrade the country’s infrastructure. Hyosung also has a heavy industries arm.

Later in February, Cho also met with Narendra Modi, India’s prime minister, in Mumbai and announced plans to build a spandex factory there by 2019.