69% approve of Pyongyang summit accord

69% approve of Pyongyang summit accord

Nearly seven out of 10 South Koreans are happy with an agreement reached between South Korean President Moon Jae-in and North Korean leader Kim Jong-un during their third summit in Pyongyang two weeks ago, according to a poll conducted by the JoongAng Ilbo last week. 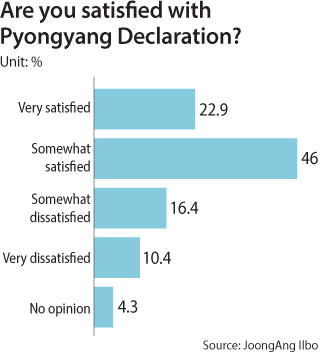 In a survey conducted from Thursday to Friday of 1,000 adults nationwide, 68.9 percent of respondents said they were satisfied with the outcome of the third Moon-Kim summit held in the North Korean capital from Sept. 19 to 20. The other 26.8 percent said they were not happy with the outcome. The survey has a margin of error of plus or minus 3.1 percentage points.

In their so-called Pyongyang Declaration, the two leaders “agreed to cooperate closely in the process of pursuing complete denuclearization of the Korean Peninsula” as well as to cease all confrontational acts in all domains - air, sea and ground - along the border, which the Blue House said were equivalent to a practical “end-of-war declaration” between the two countries.

While nearly two-thirds of the respondents were satisfied with the Sept.18-20 Pyongyang summit, many remained dubious about North Korean leader Kim’s sincerity about denuclearization. Some 52.3 percent said they do not trust the young leader. 46.1 percent said otherwise.

Busan, Ulsan and South Gyeongsang had the highest number of people expressing doubt about Kim’s sincerity with 60.6 percent saying they did not trust him. In Daegu and North Gyeongsang, 59.3 percent of those polled answered the same. The Gyeongsang region is known as the traditional support base for the conservative Liberty Korea Party, which champions a hard-line North Korea policy. The number of respondents suspicious of the North’s intentions was much lower in Gwangju and the Jeolla region at 34.6 percent.

Jeolla is a stronghold for the ruling Democratic Party and showed strong support for the Pyongyang Declaration, with an overwhelming 91.9 percent of respondents expressing satisfaction with it.

On the prospect of declaring an end to the 1950-53 Korean War, which ended in a truce, not a peace treaty, more than half of the respondents, or 54.7 percent, said the declaration should come after the North carries out sufficient denuclearization steps, displaying a cautious attitude towards the North’s denuclearization commitment.

Formally ending the three-year war that broke out 68 years ago is a long-running demand by Pyongyang, which sees an end-of-war declaration as a first and critical step towards winning its regime security since it would pave the way for opening diplomatic ties with the United States. Pyongyang demands that Washington agree to the declaration in exchange for denuclearization steps it has taken.