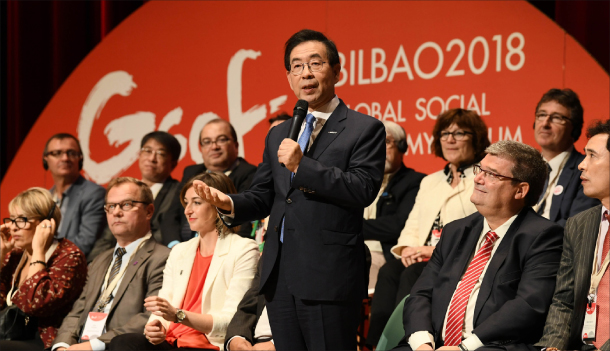 Seoul Mayor Park Won-soon affirms his city’s commitment to supporting social economy in front of other mayors and representatives of cities and local governments at the Global Social Economy Forum in Bilbao, Spain, on Monday. [SEOUL METROPOLITAN GOVERNMENT]

BILBAO, Spain - The mayors of Seoul, Bilbao, Salla, Tarnos, Mondragon and representatives of dozens of other cities around the world reaffirmed commitments to promote alternative ways of producing goods and services through better practices at the launch of the Global Social Economy Forum (GSEF) in Bilbao on Monday.

“Social economy is no longer merely an alternative,” said Seoul Mayor Park Won-soon at the Euskalduna Conference Centre in Bilbao. “It is a new movement towards solidarity and cooperation that is bringing about innovation and change. All of us have the responsibility of solidarity and cooperation, to share experience and knowledge, and to create a society where everyone can lead better lives together.”

The GSEF was inaugurated in Seoul in 2014. The third forum of its kind, the forum hosted in Bilbao under the theme, “Social Economy and Cities: Values and Competitiveness for an Inclusive and Sustainable Local Development,” attracted some 1,700 representatives of cities and civil societies from more than 80 countries. Seoul has been the president of the organization since 2014.

“GSEF is more than just an event,” said Bilbao Mayor Juan Mari Aburto at the launch of the three-day forum. “It is a big congress where we are going to work and share experiences and try to reach a conclusion in order to achieve a more inclusive society that is focused on the people.”

Social economy can be defined as a “set of private, formally-organized enterprises, with autonomy of decision and freedom of membership, created to meet their members’ needs through the market by producing goods and providing services, insurance and finance, where decision-making and any distribution of profits or surpluses among the members are not directly linked to the capital or fees contributed by each member, each of whom has one vote, or at all events take place through democratic and participative decision-making processes,” according to the European Economic and Social Committee.

Spain is home to Mondragon Corporation, a success story in terms of the principles of social economy. It is known for equality in salary ratios and a democratic system within the management. Its executives are elected by the employees. The corporation is the world’s largest network of workers’ cooperatives.

Mondragon President Inigo Ucin emphasized the need for cooperatives around the world to lead a centralized effort together to compete with businesses globally.

“We have to inter-cooperate among cooperatives,” he said, “and not only with cooperatives but also with other companies and local governments in our regions and also around the world. This needs to be done in order for cooperatives to survive and maintain its economic activities.”

“Cities are indeed powerful and dynamic engines of growth - they can be sources of innovation and creativity, bringing people together in unexpected ways,” said Ulla Engelmann, head of Advanced Technologies, Clusters and Social Economy Unit of the European Commission.