Hyundai, Kia on the rise in Europe

Hyundai, Kia on the rise in Europe 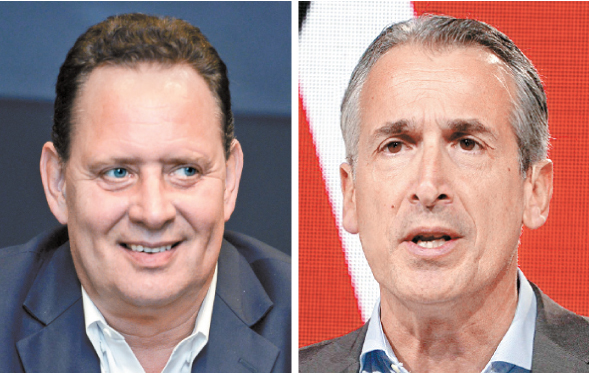 PARIS - Europe is a tough auto market to break into due to strong homegrown brands, but Hyundai and Kia are having a good year so far.

Despite these circumstances, Hyundai Motor and Kia Motors, Korea’s top two automakers, are expected to post record sales of over one million cars in Europe this year for the first time since they entered the market four decades ago.

According to the automakers, Hyundai Motor and Kia Motors together sold 715,050 cars this year in Europe as of August.

If sales trends continue until the end of this year, Europe would be the third market where they top one million sales, after the United States and China. Hyundai and Kia’s market share, which stood at 3.4 percent in 2008, jumped to 6.4 percent this year as of August. They are now the top non-European automakers on the continent.

This growth was possible due to a multitrack strategy that fulfilled the diverse needs of local customers, according to Thomas A. Schmid, the chief operating officer of Hyundai Motor Europe.

“Hyundai is not anymore the value-for-money car,” said Schmid in an interview with the Korean press on Tuesday. “But it is moving into a real brand. We are innovative and high-tech. The understanding towards Hyundai is changing.”

Hyundai Motor launched its i series, such as the i30, to meet local demand for small, practical cars. Hyundai sold a total of 275,918 i series models in Europe last year, accounting for 52 percent of Hyundai’s local sales. 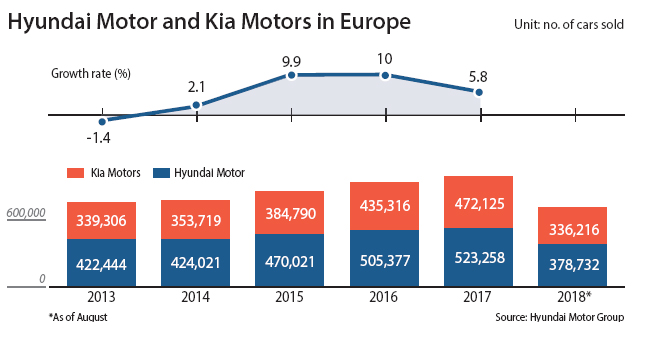 Kia Motors also is moving forward with its European strategic lineup, the Ceed. Kia Motors launched its five-door Proceed wagon at the Paris Motor Show, and its body type will continue to grow more diverse.

“We have very diversified and very ample lineup,” said Emilio Herrera, the COO of Kia Motors Europe, on Tuesday. “We are present in almost all segments, and we have a solid foundation of quality and design.”

Meeting demand for conventional cars in Europe while not forgetting to invest in electric cars and self-driving technology have elevated Hyundai and Kia’s brand image among young customers.

Herrera said that all vehicles in the Kia Ceed family will feature eco-friendly engine in the coming future.

“Europe is an overregulated market. We have a lot of additional taxation mainly in consumption on CO2,” said Schmid. “Therefore, there is strong demand for eco cars and Hyundai is investing in all segments, such as HEV, PHEV, Pure EV as well as fuel cell technology.”

In regards to Chinese manufacturers entering the European market, both COOs weren’t much disturbed. At the Paris Motor Show, Chinese GAC Motors made its European debut.

Schmid, however, said it would take a long time for Chinese automakers to settle in to a complex market like Europe.

“It is a real challenge for anyone coming to this market. … You need to fulfill the requirements such as the regulation, taxation, strong distribution network and have high-quality standards,” said Schmid. “I don’t believe that is easy to do for the Chinese.”

Kia Motors’ Hererra said he was “confident” and pledged to shift Kia into an “electrified” brand before the Chinese competitors enter the market.

Both the auto companies are on the right track to reach their sales targets in Europe, according to the COOs. Hyundai Motor, which has a 4 percent market share in Europe at the moment, will exceed the sales objective of 525,000 to reach 535,000 units this year. Kia is also on its way to reaching its sales target of 500,000.

“It is still an ongoing process. But it is helping business in general because we are responsible directly with the utility. It enables more precise forecasting,” Schmid added.