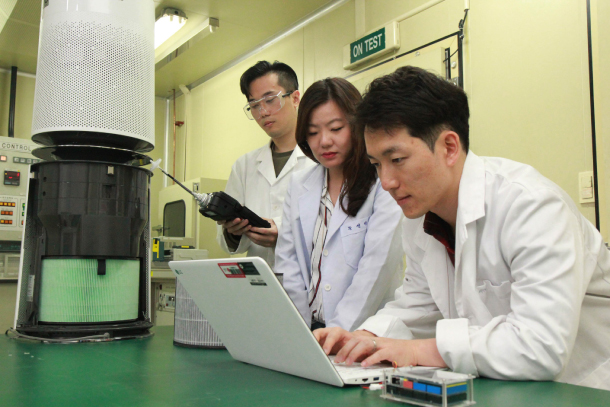 The Air Science Lab opened Tuesday at LG’s R&D Campus in Gasan-dong, Geumcheon District, southern Seoul. It will be in charge of developing core technologies for air purifiers, from collecting dust to removing odors and germs. A team of professors in related fields will advise the researchers, the company said.

The main tools in the lab are instruments to measure and eliminate dust, harmful gasses and germs that can be found in ordinary households. The center is similar to the Water Science Lab the company opened in Changwon, South Gyeongsang, in February.

“Researchers will study change in air quality in all parts of a household, from living rooms to kitchens, and develop effective ways to clean the air,” LG said. Technology developed in the Air Science Lab will be applied to many of the company’s consumer products even beyond air purifiers such as air conditioners and dehumidifiers.

The launch is in line with an increasing worry about indoor air quality by Korean consumers. Fine dust has drastically increased in the last few years, creating a demand for products to control the air quality inside households. Sales of air-related home electronics have seen a rapid increase.

Air purifiers alone are expected to sell over 2 million units this year. LG also had a success with the Tromm Styler, a dry-cleaning system at home, which created a product category of its own upon release and is now one of the company’s best sellers.

“The level of interest in clean air indoors is gradually increasing, so once we start applying study results from the lab, it will inevitably strengthen the competitiveness of our air solution business,” LG said in a statement.