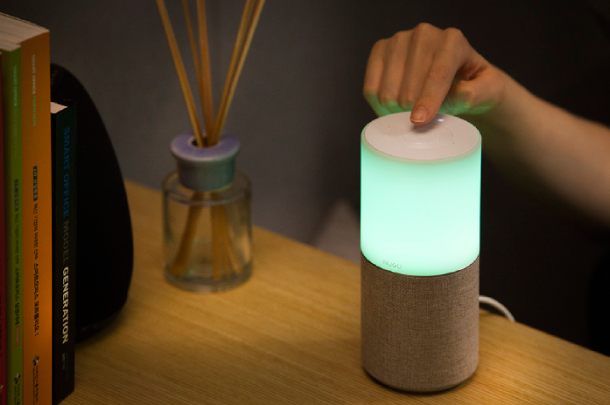 The company hopes to use its AI technology to improve various hospitality services offered at the hotel, located near Busan’s famed Haeundae Beach. It will start by placing the latest version of its voice-powered smart speaker Nugu, dubbed the Nugu Candle, in about 100 hotel rooms this year.

The Nugu Candle, released in July, offers more mood-lighting options than its predecessors in 17 different colors from its own light-emitting diodes (LED).

The device can answer customers’ verbal inquiries about hotel facilities and tourist information about surrounding areas.

The device will also be used in restaurants and wine bars inside the hotel. The smart speaker is not capable of controlling lamps in the room or curtains yet, a spokesperson from the mobile carrier said.

But the partnership could expand to offering more AI-based hospitality services in the future, and the device will be given software upgrades to support new features.

“We will keep striving to make sure AI becomes a natural part of our customers’ lives,” said Park Myung-soon, head of SK Telecom’s AI business unit.

It’s not the first time Nugu has been placed in hotels. An earlier version of Nugu is being used at the Walkerhill Hotel in eastern Seoul. The company placed Nugu in all 250 rooms at the Walkerhill about two weeks ago, according to the company.

That device can control some room settings, like temperature, through voice commands.

KT is the mobile carrier’s largest competitor in putting AI technology into hotels. KT introduced a hotel version of its GiGA Genie smart speaker in July.

The hotel version has a 10.8-inch display and it understands English, unlike the original GiGA Genie for homes. It can control lighting, room temperature, televisions and order things from the front desk on voice commands. The hotel version is currently being used in the Novotel Ambassador Hotel & Residence in Dongdaemun and L’escape Hotel in central Seoul.

Kim Chae-hee, senior vice president of KT’s AI business unit, at a press event held in July said KT will continue to target hotels as customers increasingly look for services that don’t require them to interact with hotel staff face to face.