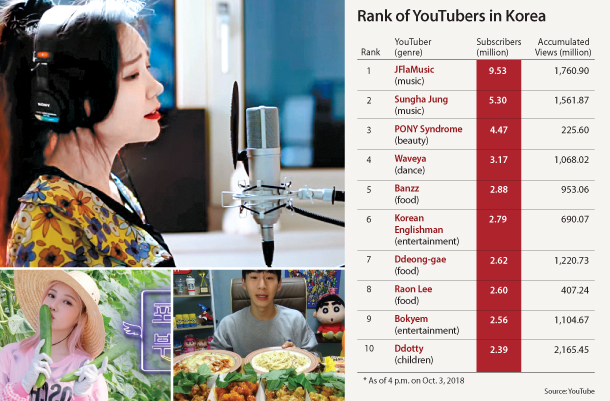 Clockwise from top: J.Fla, who has seen the biggest increase in the number of subscribers, Banzz, who creates food-related content, and cosmetic guru PONY Syndrome. [JFLAMUSIC, BANZZ, PONY SYNDROME]

Kim Jung-hwa will soon be Korea’s first YouTube content creator with 10 million subscribers as early as the end of this month. Known by her YouTube channel, JFlaMusic, or J.Fla for short, Kim is becoming popular for her covers of popular songs.

J.Fla has 9.53 million subscribers as of Oct. 3. Excluding channels operated by news and entertainment agencies such as BTS and SM Town, J.Fla ranks first in the number of subscribers among YouTube content creators in Korea.

J.Fla has been making covers of well-known songs on YouTube since 2011 and has gained popularity for her expressive vocals and musical interpretations.

This March, the artist was first in Korea for the number of subscribers on YouTube and has since been adding an average of 14,000 subscribers a day.

On Sept. 20, J.Fla released the album “Believer.” Its success could propel the number of subscribers to her YouTube channel to 10 million by the end of this month.

On a broader note, there are over 10,000 YouTube channels operating in the country, according to Google Korea.

Piggybacking off the rise of K-pop, channels for music, beauty, food and children’s shows have become all the rage. Along with J.Fla, other music channels have dominated the upper echelons of YouTube in Korea.

Waveya, a dance duo formed by sisters Jang Eun-young and Jang You-sun, ranks fourth in subscriber count in Korea. On how they started out on YouTube, the sisters said, “We first uploaded videos covering dances of artists on television; soon afterwards we became full-time YouTubers.”

Another YouTuber, Raon Lee, who places eighth, became famous after singing the theme song for the Japanese animation series “Gintama.”

Meanwhile, among beauty and fashion YouTubers, Park Hye-min, known by her channel name PONY Syndrome, is regarded as a top influencer in the beauty industry. Her 10-minute videos are peppered with hundreds of comments soon after they are uploaded.

Toys, dancing and gaming are responsible for most of the views for children’s content on YouTube. Ranking 13th is Awesome Haeun, a channel which uploads dance videos of Na Haeun. Na Haeun first entered the limelight when she appeared on a local television show. Na Hee-sun, who runs the children’s channel Ddotty, earned the nickname “the children’s president” due to his wide popularity with kids.

YouTubers are also starting to influence new areas such as current event topics.

The Great Library, which sits at 14th, was invited by the Blue House earlier this year to do a quiz show on constitutional amendments. The Blue House also ran a debate room on The Great Library’s channel, which has 1.87 million subscribers and is famous for its charismatic host Na Dong-hyun.

Heopop, in 11th spot, originally worked as a courier, while The Great Library formerly worked at an online education company.

Despite all their differences, many of these channels went through at least two and at most ten years of hardship before they gained recognition. Banzz said that he first streamed online for just two viewers in the beginning of his career, and PONY had done everything from blogging to YouTube since she was in high school.

On the income of YouTube stars, an official at a multichannel network said, “When you reach 300,000 subscribers, you earn an income similar to those of doctors or lawyers... The top 1 percent of YouTubers have an annual profit of over 100 million won [$89,400].”