Pompeo to fly into Pyongyang Sunday

Pompeo to fly into Pyongyang Sunday 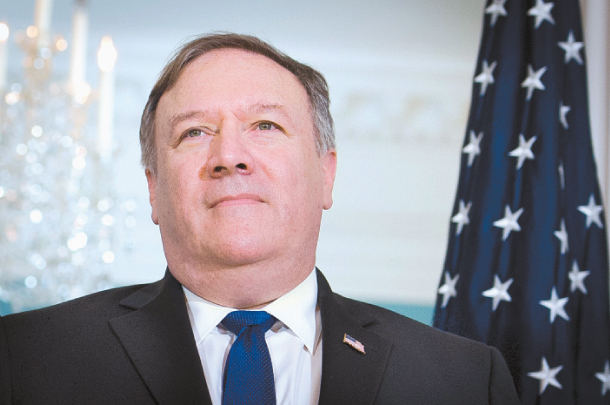 U.S. Secretary of State Mike Pompeo will make his fourth trip to Pyongyang this year to meet with North Korean leader Kim Jong-un Sunday, the State Department announced Tuesday, as a second summit between the countries’ two leaders is in the works.

The U.S. State Department said in a statement that Pompeo will make a four-country Asia trip kicking off Saturday, which will take him to Tokyo, Pyongyang, Seoul and Beijing. He will reiterate the Donald Trump administration’s “continued focus on the final, fully verifiable, denuclearization of the DPRK and longstanding commitment to our alliances and partnerships in the region,” the statement said. DPRK is an acronym for North Korea’s official name, the Democratic People’s Republic of Korea.

Stephen Biegun, the new U.S. special representative for North Korea, confirmed to reporters in Washington later that day he will be accompanying Pompeo, marking the former Ford Motor executive’s first trip to Pyongyang since he took the post.

Pompeo will be in Tokyo Saturday and Sunday and meet with Japanese Prime Minister Abe and Foreign Minister Taro Kono, according to the State Department. Following his day trip to Pyongyang Sunday, he will visit Seoul later that day for an overnight stay and meet with South Korean President Moon Jae-in and Foreign Minister Kang Kyung-wha. He will travel to Beijing later Monday to “meet with his Chinese counterparts to discuss bilateral, regional, and global issues,” the State Department added, without elaborating on which officials Pompeo will be meeting with.

Pompeo, as director of the Central Intelligence Agency, first met North Korean leader Kim in Pyongyang at the beginning of April. He made a second visit to Pyongyang in May, leading up to the historic June 12 summit between U.S. President Donald Trump and Kim in Singapore, then another trip in early July.

On his third trip, Pompeo did not meet leader Kim. On Aug. 23, Pompeo announced the appointment of Biegun as the State Department’s new special envoy for North Korea and revealed they would both be making a trip to Pyongyang. Trump abruptly canceled that trip the following day, after reportedly learning of a belligerent letter by Kim Yong-chol, vice chairman of the Central Committee of the North’s ruling Workers’ Party, addressed to Pompeo.

On this fourth visit, Pompeo is expected to discuss a date and venue for the second summit between Kim and Trump. Since U.S. midterm elections take place on Nov. 6, some observers point out a second summit may take place before then, leaving little time for preparation.

Trump said on Sept. 24, ahead of talks with President Moon Jae-in in New York, that a second summit with Kim Jong-un would be announced in a “pretty short period of time,” and that the format will be “similar” to the first summit but it would “most likely [be] a different location.”

The key interest in Pompeo’s visit is whether he puts denuclearization talks back on track, possibly by promising a declaration to end the 1950-53 Korean War in return for the North’s dismantlement of its Yongbyon nuclear complex or a declaration of its nuclear stockpile and facilities.

However, a North Korean state media report Tuesday accused Washington of using the end-of-war declaration as a “bargaining chip,” and declaring North Korea will not “particularly hope for” one if the United States doesn’t want it. The Korean War ended in an armistice agreement, not a peace treaty.

Heather Nauert, spokesperson of the U.S. State Department, brushed off North Korea’s report in a press briefing on Tuesday. “Other countries sometimes will say things that are more colorful than the United States will, and that’s just fine too,” she said. “We have a meeting scheduled. We’re looking forward to that and pushing ahead.”

When asked if Washington is prepared to declare an end to the Korean War in exchange for North Korea’s declaration of its nuclear stockpile and facilities, Nauert replied that Kim Jong-un “had agreed” to denuclearize to President Trump, “and that is a policy that we are working toward.”

Washington is “closely coordinating with the Japanese and the South Koreans” on the issue of a declaration to end the war, she said, “and we look forward to having meetings with [them].”

Pompeo has suggested a deadline of January 2021 for denuclearization of the North, falling within Trump’s first term as president.

Trump last week asserted it “doesn’t matter” how long it takes, saying he will not play a “time game” on the denuclearization of the North.

Nauert clarified on the timeline, “The secretary and the president said we’re not going to set arbitrary deadlines in the interim. We’re hopeful. We’re working toward that goal.”

Pompeo’s fourth visit this year, despite his canceled trip last August, “shows forward progress and momentum,” said Nauert. “Of course, we have quite a ways to go, but we look forward to the next steps in this conversation,” toward the “goal of full denuclearization of North Korea.”

When asked if North Korea has done something in particular to make Pompeo believe that his upcoming trip is going to be productive, Nauert said, “Obviously these conversations are going in the right direction, and we feel confident enough to hop on a plane to head there to continue the conversations.”

She stressed that U.S. and UN Security Council “sanctions remain in full effect,” adding, it will not be “easing the pressure” at all for now.

Pompeo has negotiated primarily with Kim Yong-chol since his first Pyongyang visit, but there is interest to see if his negotiating partner will transition to North Korean Foreign Minister Ri Yong-ho, who made a weeklong trip to New York last week to speak at the UN General Assembly. Ri and Pompeo met in New York on Sept. 26.

A key Blue House official told reporters in Seoul Wednesday, “I believe the trip to North Korea falling a little earlier than expected can be viewed positively. However, there is clearly a difference in viewpoints between the two sides, North Korea and the United States, so there is still no way of knowing what sort of results will be brought out [from the trip].”

The official was skeptical if the Pyongyang visit would immediately yield a date and venue for the second Kim-Trump summit. He said, if the two sides could narrow their differences, there “is a higher likelihood that the second summit can be held before the U.S. midterm elections.”

But the official said an end-of-war declaration was not expected at the summit, though Kim and Trump may make some sort of joint statement on the issue. The actual declaration could take place “at another time,” after the summit but before Kim visits Seoul.