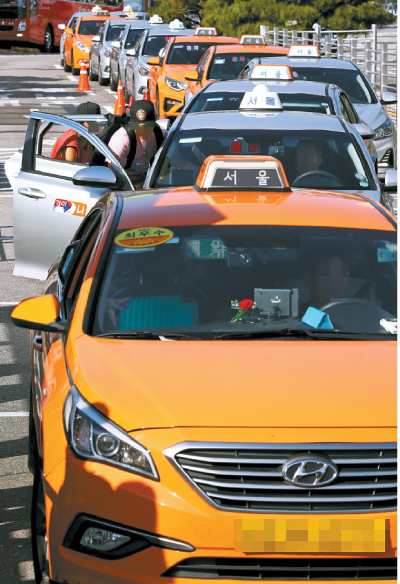 Taxis wait for passengers at a stop near Seoul Station in central Seoul on Wednesday. [YONHAP]

A joint committee launched by the Seoul Metropolitan Government and composed of taxi driver union representatives, experts, civic groups and city officials reached an agreement Tuesday afternoon to raise the base fare after an extended internal debate that began last November.

The committee was torn between two different starting fares - 3,900 won and 4,000 won - and decided on the latter this week.

The late night/early morning surcharge on fares will also start at 11 p.m. instead of midnight. Currently, fares for taxi rides have an added 20 percent surcharge from 12 a.m. to 4 a.m.

A spokesman for the Seoul city government explained that the fare hike was based on “rises in base prices, the minimum wage and estimates of a living wage in Seoul for next year.” The Seoul government decided on Monday to set next year’s living wage - the minimum income necessary for a worker to meet his or her living needs - at 11,480 won per hour based on current price levels.

The fare hike still needs to go through the process of a public panel debate, recommendations by the city council and approval by a city committee that reviews taxi policies and another that appraises price adjustments. But given that decisions arrived by joint committees in the past were implemented without revision, it’s highly likely that 4,000 won will be the base fare for cab rides as soon as the review process is concluded, which may be as soon as the end of this year.

This is the first time in five years that the committee resolved to raise the base cab fare in Seoul. The fare was raised from 2,400 won to the current 3,000 won in October 2013 and has been frozen ever since. When internal negotiations began in November, committee members and the city government at one point considered raising the base fare to 4,500 won. But concerns over a public backlash eventually won out, which analysts say likely led to the compromise of 4,000 won.

The approximately 72,000 licensed taxi cabs in Seoul can be broadly classified into two types: regular and brand taxis. Regular taxis, the most abundant type, are owned by the drivers themselves, who must have five years of an accident-free record as a brand taxi driver.

By contrast, brand taxis are owned and operated by companies that dispatch the cars upon request. Drivers working for brands must pay a certain fee to the cab company out of their daily earnings as rent for their vehicles, a sum that varies for different companies. Fare hikes in the past prompted companies to raise such fees, leaving drivers with few gains. To ensure drivers benefit from the fare adjustment, the Seoul government on Sept. 20 mandated that 80 percent of gains from this newest fare hike must be allotted to drivers’ salaries for six months after the rise.

Responses to the fare hike from both types of cab drivers have been mixed. Brand taxi drivers expressed concern over potential raises in their company fees after six months, while some regular cab drivers said they were satisfied with the decision for now.

City residents, however, were largely taken aback by the fare hike.