For the first time in 44 years, the Korean women’s volleyball team failed to advance to the FIVB Volleyball Women’s World Championship’s round of 16 in Japan on Thursday, putting them in danger of not qualifying for the 2020 Tokyo Olympics. 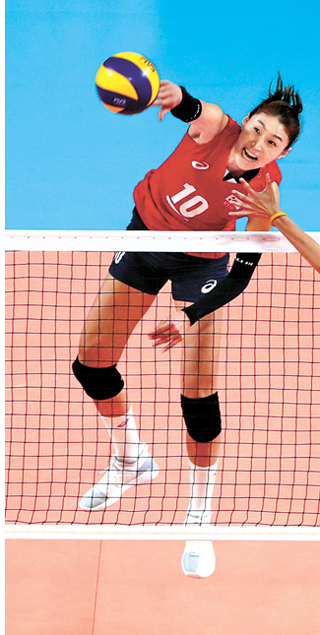 Kim Yeon-koung spikes during Korea’s semifinal match against Thailand at the 2018 Asian Games in August. [YONHAP]

Korea, who is ranked 10th, finished the tournament with a 3-0 victory over Trinidad and Tobago to finish the preliminary round on Thursday, but that didn’t bring them any closer to advancing to the round of 16.

In Group C, Korea finished fifth with one win and four losses. Only the top four teams in each group earn a spot on the second round of the tournament.

There were expectations that Korea would win three of the five matches to place third in the group, but instead, they started the tournament with a disappointing 2-3 loss against 16th-ranked Thailand and 1-3 loss against 24th-ranked Azerbaijan.

As expected, Korea lost to higher-ranking countries Russia and the United States. Since the tournament first expanded the number of participating countries to 24 in 1974, this is the first time that the Korean women’s team has been eliminated in the preliminary round.

The World Championship, held once every four years, was an important tournament for Korea as they set their sights on participating at the 2020 Tokyo Olympics.

The group assignments at the 2020 Tokyo Olympics are made according to world ranking. As this championship allots some of the most points for world rankings, Korea hoped to raise their ranking through the tournament.

However, a shocking elimination has now put them in a tough position in maintaining their spot in the rankings and thus puts them at risk of not qualifying for the Olympics.

But this was somewhat expected for the team. When head coach Cha Hae-won announced his 14-player roster, many Korean volleyball teams expressed negative opinions about the inclusion of three inexperienced high-school players - Park Eun-jin, Lee Ju-ah and Jung Ho-young.

Since the start of the 2018 FIVB Volleyball Women’s Nations League, the first international tournament this year, Cha has been focusing on selecting younger players for the team in preparation for after the Tokyo Olympics. Kim Yeon-koung, captain of the team, is 30, and most of the starting players are around that age.

“It is very likely that the Tokyo Olympics will be Kim Yeon-koung’s last [Olympics],” Cha explained. “It’s a selection I made in hopes of a successful generational change after [the Olympics]. I wanted to find young players with potential.”

Cha’s decision to select young players was reasonable but led to disappointing results for the team as the new players lacked experience.

Aside from Park, the other two high-school players didn’t get much playing time. When middle blocker Yang Hyo-jin, one of the starters on the national team, had to make an early exit due to an ankle injury, Park was substituted in the match.

Cha didn’t allow himself to have enough entry positions available for wing spikers when he selected three liberos, Kim Hae-ran, Na Hyun-jung and Oh Ji-young, for the team to Japan.

Due to this, Cha had to lead the team in Japan with only three wing hitters. Normally, teams require more hitters and middle blockers than liberos proportionally.

Making it worse, as Lee So-young, one of three hitters, got injured during the tournament, the other two hitters - Kim and Lee Jae-young - had to compete throughout rest of the tournament under tremendous pressure.

Because of this, Korea ended up with a disappointing roster at one of the most important tournaments of the season.

Aside from Kim Yeon-koung, the majority of the team’s starting players had to compete in almost 30 games over five months, excluding the AVC Cup, prior to the world championship. This is one more game than what they would play in a full season in the V League.