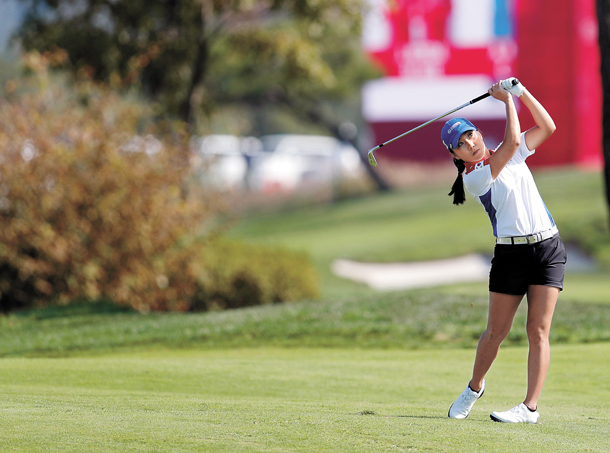 Kim In-kyung watches her shot during the first round of the UL International Crown on Thursday. [YONHAP]

Korea got off to a great start in the first round of the UL International Crown, winning both of its matches against Chinese Taipei at the Jack Nicklaus Golf Club Korea in Incheon on Thursday. 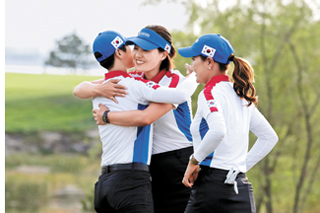 Team Korea celebrates after winning their matches on the first day of the UL International Crown at Jack Nicklaus Golf Club Korea in Incheon on Thursday. [AP/YONHAP]

Top-ranked Park Sung-hyun made a successful debut at the UL International Crown, winning her first four-ball match one up with her partner Kim In-kyung against Chinese Taipei’s Candie Kung and Phoebe Yao.

Korea’s first pair got off to a quick start by taking the lead with Kim’s par on the par-4 second. Then, with Kung’s birdie and a par on par-4 fourth and par-4 sixth, Korea lost its lead to Chinese Taipei. Korea quickly got its lead back, though, with Kim’s back-to-back birdies.

“I felt like my heart was going to burst out of my chest,” Park said after the round.

In a four-ball match, two teams play against each other in a group of four, with two players paired as a team. All four golfers play their own ball, and the team’s score on each hole is the lower of the two players’ scores.

Following Kim and Park’s victory, Korea’s second pair - Ryu So-yeon and Chun In-gee - continued the team’s stride with their strong back nine to add two more points for Korea. After finishing all-square in the first half of the round, Chun finally allowed Korea to take the lead once again with a birdie on the par-4 11th. Chinese Taipei responded with a birdie on the par-4 14th to tie the match, but Korea didn’t wait long to pull ahead, winning the par-5 15th and the last hole with birdies.

“Whenever I was about to feel down, the fans picked me up,” Chun said after the round. “I usually tend to get nervous at the first tee, but I was trying to channel that into something more positive.”

With two wins, Korea leads Pool A with four points, just one ahead of England. Korea is also the only team to have won both of its matches.

Prior to Korea’s matches, in Pool A, England and Australia were the first two teams to add points to the leaderboard. England’s Charley Hull and Georgia Hall halved their match against Australia’s Minjee Lee and Sarah Jane Smith to take a point each, but England was already the leader, as their second group - Bronte Law and Jodi Ewart Shadoff - defeated Australia’s Katherine Kirk and Su Oh four up to take two points.

Starting today, Korea will start its second round against Australia while England will play against the Chinese Taipei in Pool A today.

In Pool B, Thailand is the leader, as it earned three points on the first day. Team Thailand’s Ariya Jutanugarn and Sherman Santiwiwatthanaphong defeated Japan’s Misuzu Narita and Mamiko Higa two up to take their two points, while Thailand’s other pair of Moriya Jutanugarn and Pornanong Phatlum halved their match against Japan’s Nasa Hataoka and Ayako Uehara to add another point for the team. With three points, Thailand has a one-point lead over the defending champion, the United States.

The United States’ veteran pair of Cristie Kerr and Lexi Thompson won two-up in their match against Sweden’s Pernilla Lindberg and Madelene Sagstrom. However, as Sweden’s pair of Anna Nordqvist and Caroline Hedwall won the team’s second match two up against Jessica Korda and Michelle Wie, Team USA is tied for second at two points with Sweden.

The United States will play its second round against Thailand, while Japan plays its second day of four-ball matches against Sweden today.

Until Saturday, the teams will play four-ball matches in their pool. The top two teams from each pool and one wild-card winner will advance to Sunday’s singles matches. On Sunday, the last day of the tournament, each country will play one singles match against every other country, and the team with the highest number of points will win the tournament.