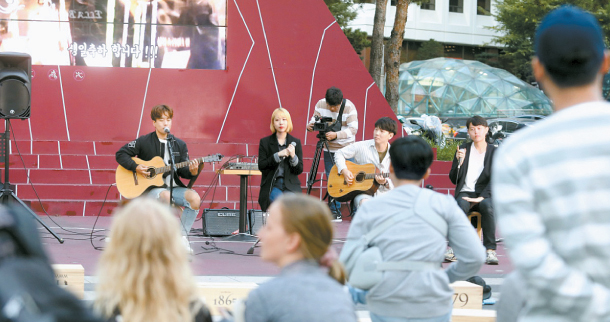 Gangnam in southern Seoul has long been one of the city’s hot spots. Following the international success of singer Psy’s “Gangnam Style” in 2012, tourists are now making it a point to visit the area to check out what it has to offer. Ever since, Gangnam District has been trying to cash in on the song’s success to boost the district’s image, and an annual Gangnam cultural festival was part of the effort.

“The plan is to transform Gangnam into one big festive stage to gain worldwide attention,” said Jeong Sun-gyun, the head of Gangnam District, in an interview with Joongang Ilbo, an affiliate of Korea JoongAng Daily.

The 10-day festival kicked off with an opening ceremony on Sept. 28 at Coex’s K-pop plaza that was attended by over 2,000 people. The event included fireworks and star-studded performances from boy band NCT, the Seoul Ballet Theater, Nanta, and gugak (traditional Korean music) singer Lee Yoon-a. After the ceremony, the movie “La La Land” was screened for those in attendance.

The Gangnam Festival was initially launched in 2012 with three main events - a marathon, a fashion show and a K-pop concert - and took place over a five-day period. Each year, the district has added more performances and activities targeting Koreans of all ages, from children to elders and foreign tourists.

The following are some events to check out at the festival this year.

For fans of globally successful boy band BTS, the great news is that there is a BTS hanbok (traditional Korean clothing) exhibition being held at the Gangnam Tourist Information Center. Seven sets of fusion hanbok worn by BTS members in their “Idol” music video are on display, and visitors can try on similar garments.

In the East plaza of the Coex Mall, the Music & B-boy party wraps up today. Featuring rising K-pop stars such as The Boyz, Kisum, Black6ix, Hwang Chi-yeul and Neon Punch, fans have crowded the stage since the event kicked off on Monday.

On Oct. 6, a huge K-pop concert will be held at Yeongdong-daero in front of the Coex Mall. The lineup includes big names in K-pop like Wanna One, Exo-CBX, Red Velvet, Sunmi, Dynamic Duo, Eddie Kim and more.

For those who are unable to attend the concert, the good news is that JTBC will televise the show on Oct. 13.

Next to the Music & B-boy party is the Food & Beer festival, which is also open until Oct. 6 and is filled with food trucks and music. Each truck sells unique foods, including tteokbokki (spicy rice cake), pizza, mandu (Korean dumplings), chicken tacos, cheese fries, ice cream, and of course, beer. Prices range from 3,000 won ($2.66) to 10,000 won.

“I’m staying at the hotel right next to this place, and I came over to watch the festivities here,” said a tourist from Dubai. “I like it. It’s nice.”

The World Hansik Festival began at the Coex K-pop plaza on the morning of Oct. 4, featuring star chefs Lee Won-il, Park Jun-woo and Oh Se-deuk who will be in attendance to stage cooking shows. The event, which wraps on Friday, also includes gukak, cooking, dance and band performances throughout the first day.

On Oct. 7, a global master chef food festival will be held near Bongeun Temple at 10 a.m., right after the global peace marathon. Participants of the marathon will be able to taste a variety of global cuisines at affordable prices right after finishing the race. Master chefs will be serving warm food from 10 a.m. to 2 p.m.

Taking it to the streets

It is not uncommon to see musicians performing outside subway entrances and along sidewalks in Gangnam’s Yangjae, Suseo and Garosu-gil neighborhoods. In celebration of the Gangnam Festival, these concerts are getting bigger and better. The concerts are scheduled to be held until Oct. 6.

Flea markets will also be set up near apartment communities - at parks, community service centers and even in parking lots - where vendors from different regions have gathered to sell their unique products during the festival week.

On Oct. 2, Dogok 1-dong Community Service Center was surrounded with vendors selling regional dishes and specialties to the neighborhood. At the entrance, a middle-aged woman was selling fruits from Goesan, North Chungcheong. Right next to the woman, a group of elders were selling dried fish from Geogeumdo, an island in South Jeolla. Other specialties included dried mushrooms, balloon flowers, noni and hibiscus originating from different regions throughout Korea.

“This is a great opportunity for everyone. We sell our regional products during the festival week in Seoul at affordable prices, and people do not have to travel far to get these products,” said the host of the market. “It is mutually profitable.”

People coming from abroad also had the chance to perform at the festival.

On Oct. 3, two groups - Popeye and Olive from England and Switzerland and il Grande Piano from Italy - held lively dance performances at the plaza in front of Galleria Department Store in Apgujeong. Popeye and Olive performed exciting acrobatic performances riding a unicycle and dancing with music, while il Grande Piano used their bodies and feet to dance on a huge floor piano.

Gangnam Festival 2018 will take place until Sunday, finishing with a world peace marathon and food festivals. All events are free. For more details, visit www.gangnam.go.kr.