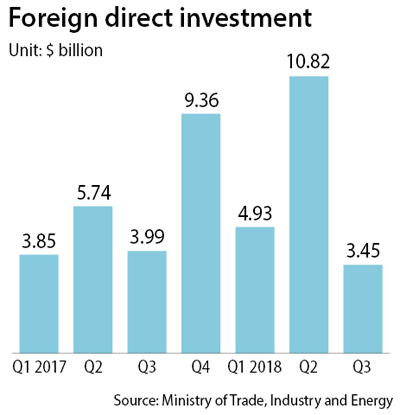 Total foreign direct investment in Korea for the first three quarters of this year reached an all-time record.

According to the Ministry of Trade, Industry and Energy, foreign direct investment between January and September amounted to $19.2 billion, up 41.4 percent compared to the first nine months of 2017.

Investment from the EU accounted for 26.7 percent of the total, the highest share. EU investment in Korea grew by a sharp 63 percent year-on-year to $5.1 billion.

Americans were the second-largest investors, accounting for 21 percent. Their investment grew by 41 percent compared to the first nine months of last year to $4.1 billion.

By industries, foreign investment in the manufacturing industry grew by 101.7 percent to $8.4 billion. This investment focused on transportation machinery, chemical engineering and electronics.

Investment in the service industry increased by 14.6 percent to $10.6 billion. Investment in innovative business areas, such as mobile finance, grew sharply.

Greenfield investment, where foreign companies start new business in Korea, saw a 37.9 percent increase to $14.9 billion. This accounts for 77.1 percent of all foreign direct investment made in the first nine months of the year.

M&A investments also grew sharply, increasing by 54.7 percent from a year ago to $4.3 billion.

“As the growth [of foreign direct investment] continued from the first half of this year, we were able to achieve an all-time record and maintain strong upward momentum,” said Lee Ho-joon, investment policy director general at the Trade and Industry Ministry. “We can say that we were able to maintain upward momentum even when faced with difficult situations externally and internally, including the expansion trade protectionism and the U.S. interest rate hike.”

Lee said that foreign investors still consider Korea an attractive country to invest in. Easing geopolitical tensions due to talks between the United States and South and North Korea have contributed to the continuing growth in foreign investment, he added.

“There is a continuing increase of investment [from foreigners] who are trying to participate in the value chain of leading South Korean industries, including semiconductors and displays. They are also trying to find new investment opportunities in the biopharmaceutical industry, digital content development, mobile finance and e-commerce,” Lee said.

If the current pace continues, the government estimates that accumulated foreign direct investment will top $20 billion. If so, this would be the fourth consecutive year in has done so.

However, the Trade Ministry said shrinking investment by local companies as well as disappointing job statistics are major concerns. It also said that expanding protectionism and trade conflict between the world’s two biggest economies ? the United States and China ? as well as the U.S. interest rate hikes are a burden on attracting foreign investors.

The ministry said it will do its best to attract foreign investment so that this year’s total investment will break last year’s all-time record of $22.9 billion.