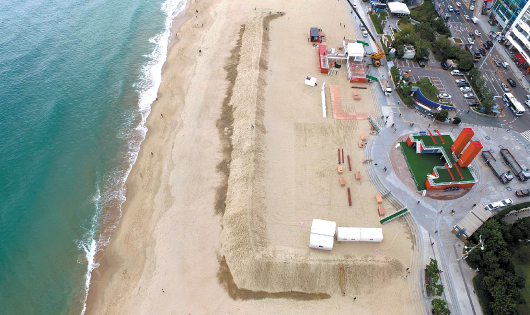 Due to the impending Typhoon Kong-rey, Busan International Film Festival (BIFF) relocated its outdoor events, scheduled to take place at BIFF Village on Haeundae beach over the weekend, indoors. [YONHAP]

Busan International Film Festival (BIFF) has made several changes to its outdoor events due to Typhoon Kong-rey, which is forecast to affect southern regions of the country until Saturday.

Asia’s biggest film festival, which kicked off in the southern port city of Busan on Thursday evening, will relocate outdoor events that were scheduled to take place in the BIFF Village on Haeundae beach from Friday to Sunday to Dureraum Square at Busan Cinema Center and a lounge in the same location.

The film festival’s opening, including the red carpet event, took place at the Busan Cinema Center on Wednesday as scheduled.

Around 20 events, including director Lee Jang-ho’s hand printing event, outdoor welcomes of stars representing titles like “Ode to the Goose” and “Asako I & II” as well as open talk events with actors and directors of major movies like BIFF’s opening film “Beautiful Days,” period epic “Herstory” and this year’s Cannes invitee “Burning” will be affected by the change.

The typhoon is forecast to hit Jeju Island and the southern regions of the country over the weekend, bringing torrential rainfall until Saturday. The typhoon is expected to pass through the East Sea on Sunday.

This is not the first time BIFF had to revise its outdoor plans due to nasty weather conditions.

In 2016, Typhoon Chaba completely destroyed BIFF Village, and forced the festival to relocate its opening to Busan Cinema Center.