‘Our country could be stuck as an immature economy’

‘Our country could be stuck as an immature economy’ 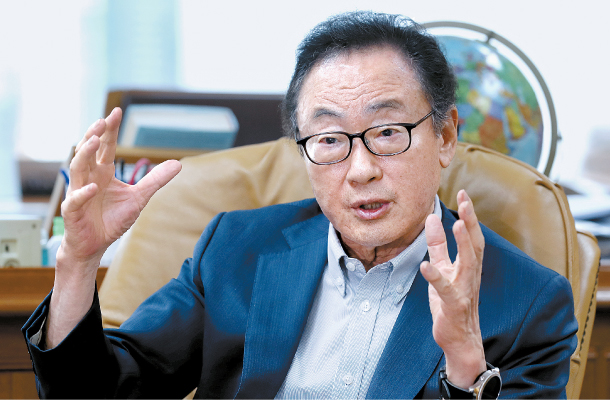 The income-led growth plan pushed by the Moon Jae-in government seems to be causing severe side effects. The number of unemployed has exceeded 1 million for eight consecutive months and the income gap is widening.

An administration that championed itself as dedicated to creating jobs seems to be pushing vulnerable people to the edge.
“Didn’t this administration start off with a process of better communication?” asked Sakong Il, the chairman of the Institute for Global Economics, who has remained quiet on the issue until now.

Then he pointed out the problem of income-led growth through logic and his opinion on where the Korean economy should be headed.
“The problem of this government is not only in economics, but the lack of effort it takes to reflect the opinions of experts and the public in the process of deciding and executing policies in every field,” Sakong said. “They need to listen to sincere advice from people who don’t want the government to fail, but to do well.”

A. The basis for the theory is not only weak, but it is a new concept that has not been proven anywhere else in the world. Moreover, the minimum wage is rising at an alarming rate. Under traditional economic theories, it is clear that such policies will not only lead to unemployment among low-income workers but also bankrupt companies that are reaching their limits. This is becoming a reality today.

The Blue House policy chief, Jang Ha-sung, says the minimum wage only accounts for 1 percent of the income-led growth policy. I don’t understand what that 1 percent means. The minimum wage system is a safety net that was created to protect workers at the bottom.

In the United States, 2.3 percent of people employed are paid the minimum wage, but in the case of Korea, that ratio goes up to 13.3 percent. Furthermore, it is higher in the restaurant, lodging and wholesale and retail businesses.

It is estimated that 72.3 percent [of the people affected by the minimum wage] work in small business [that are mom-and-pop-sized operations].

Without improving productivity, sharply raising the minimum wage will inflict huge damage on both the worker and their employers.

It seems this government’s policies are creating a mood that’s antimarket and antibusiness.

As John Maynard Keynes emphasized in the past, the animal spirit is heavily affected by the political and social mood when businesses engage in activities while taking on risks.

While policies that are disadvantageous to businesses are a problem, antibusiness sentiment, or the social and political climate that is the basis for such policies, will have a negative influence on companies’ investment and job opportunities.

Large businesses that are unfair to their small and medium-sized enterprise (SME) suppliers or customers should be dealt with strictly by the law. But measures that would prevent investment and jobs by raising problems with a company just because they are big should be rejected.

The Blue House continues to be optimistic, asking [the public] to wait until the end of the year, despite the worsening indicators. What do you think?

They need to be able to provide a convincing, logical explanation for why [people] have to wait until the end of the year. At least there should be some statistic to back up their claims.

Considering the changes in the global economic, trade and financial conditions as a result of the continuing trade war between the United States and China, the rising interest rates in the United States and the strengthening of the U.S. greenback, I don’t think [Korea’s] economic situation will see a significant improvement in the second half.
We have to be fully committed to correct the policy direction as soon as possible while strengthening our economic foundation.

As income-led growth is swirled in controversy, the government has started raising the issue of inclusive growth. Do you think the government took the right action?

There have been many discussions about inclusive growth at global institutions, including the World Bank, since the 2008 global financial crisis. And there’s a clear establishment of the concept.

But this concept is about fixing the extreme polarization of income or helping the benefits of growth spill over to the socially disadvantaged class so that a market economy can sustain growth. [If the government] aims for inclusive growth, [actions] that suppress the market’s function is not appropriate.

On the other hand, social safety nets, such as providing medical and health services, and the opportunity for education, training and retraining for those who are socially disadvantaged or low-income, should be strengthened.

There seems to be no progress on innovative growth, which is one of the key pillars of Jnomics (the Moon Jae-in government’s economic policies).

When this government launched under the banner of income-led growth and innovative growth, while I didn’t know the exact details, I saw it as two complementary policies — a short-term measure on the demand side and the long-term measure in the supply side.

This policy direction is desirable, especially since innovative growth is indispensable due to the rapid progress of the fourth industrial revolution. However, the policies employed to execute income-led growth is becoming an obstruction to innovative growth.

The government, even at this point, needs to focus its policies on creating a business-friendly environment, which was mentioned earlier, for proper innovative growth. It needs to change its course.

The government, in backing its existing policies, has created a super-sized 470 trillion won ($415.6 billion) budget.

This shows that it will be inevitable that income-led growth, or more accurately transfer-income led growth, will ultimately become government-debt led growth. Not only will people’s tax burden continue to increase, but also government tax collection with the absence of growth will expand. As such, the policies will be impossible to sustain. While our fiscal situation is still sound, we have to think about five or 10 years later.

What is the alternative?

The government should come with short-term plans with international cooperation where we can act against unstable international economic changes.

It is also urgent to simultaneously reform various systems and regulations from the current industrial era for innovative growth in the time of the fourth industrial revolution.

We should be alert and looking at China, which is already ahead of us on policies regarding artificial intelligence, big data, drones, electric cars and fintech.

Shouldn’t there be reform of the education and labor market?

Education reform will help create the talent needed in the fourth industrial revolution. The labor market needs flexibility that will help workers frequently move to new jobs and adapt to changing technologies. Training and retraining as well as life-long education, along with the strengthening of the social safety net, for vulnerable workers, should be provided.

What will happen if we hesitate on reform?

Between 1960 and 2006, our country, like Japan and Spain, avoided falling into the middle-income trap and succeeded in being included among advanced economies categorized by the international institutions. We have been included among the OECD members. Many other countries, especially South American countries, have struggle to move away from the middle-income trap. Many of these countries are stuck in populism politically and failed to come up with a proper economic policy. [However,] our reform is [currently moving] slow. Even our growth potential is falling due to the rapidly aging population, low birthrate, sluggish corporate investment and low productivity.

What is needed to escape the crisis?

The government and political parties need to create a national development strategy with a long-term vision. Politicians and policymakers have to keep in mind that our country, which has dodged the middle-income trap, could be stuck as an immature advanced economy.

The North and South issue is not something that is exclusively a concern of ours. It is a global issue or at least [a concern] to the surrounding region.

As such, close cooperation and support among major international institutions and countries is necessary. We have to approach the issue with consideration of our geopolitical position as well as the power struggle between the United States and China. Germany, which, with better conditions than what we had, was able to reunify by convincing and soothing surrounding powers, such as the British and the French, that were openly against unification. Unification and economic cooperation is a problem that can’t be solved on our own.