Delegation in North for a three-day visit

Delegation in North for a three-day visit 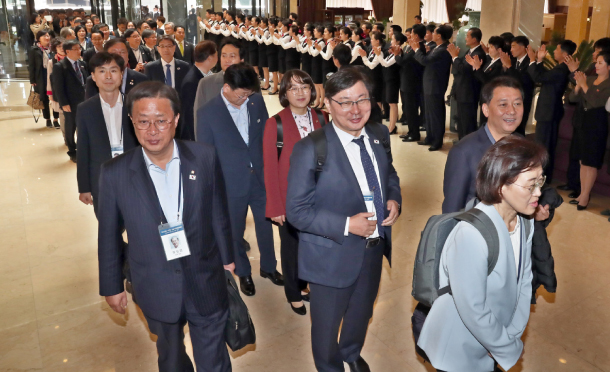 North Korean workers at the Koryo Hotel in Pyongyang welcome a South Korean delegation on Thursday as it starts a three-day visit. [JOINT PRESS CORPS]

Unification Minister Cho Myoung-gyon said Thursday he will use a visit to North Korea this week to rapidly implement agreements made in the third summit between the leaders of both Koreas last month.

Cho led a delegation from Seoul for a three-day visit to Pyongyang to celebrate the 11th anniversary of a peace declaration signed in the 2007 inter-Korean summit. The delegation left Seoul Thursday.

The so-called Pyongyang Declaration signed by South Korean President Moon Jae-in and North Korean leader Kim Jong-un on Sept. 19 in their third summit states that the countries agreed to hold “meaningful events” to celebrate the 11th anniversary of the Oct. 4 Declaration.

The Oct. 4 Declaration was signed by former South Korean President Roh Moo-hyun and then-North Korean leader Kim Jong-il in the second summit held between the leaders of the two countries since the end of the 1950-53 Korean War.

This will be the first time the two Koreas will hold a joint ceremony to celebrate the signing of the Oct. 4 Declaration, which emphasized peace, prosperity and the reunification of the Korean Peninsula.

South Korea’s delegation is composed of 160 government officials, politicians, civic group members and others from the private sector, including Lee Hae-chan, chairman of the ruling Democratic Party, who is also the chairman of the board of directors of the Roh Moo Hyun Foundation; Rep. Won Hye-young of the Democratic Party; Busan Mayor Oh Keo-don; and Chi Eun-hee, ex-chairman of the board of directors at Justice for the ‘Comfort Women,’ a civic group dedicated to Korean women who were recruited by the Japanese imperial army to work as sex slaves in military brothels during World War II.

During their stay, which lasts through Saturday, the group will participate in a ceremony hosted by both countries today at the People’s Palace of Culture from 10 a.m. to noon, watch the same mass gymnastics games that Moon saw during his visit to Pyongyang last month, visit North Korean landmarks and hold talks with their North Korean counterparts.

On Thursday evening, the delegation attended a welcome concert at Pyongyang Grand Theatre and had dinner with North Korean officials at the People’s Palace of Culture.

Inter-Korean talks are expected to focus on how to carry out the Pyongyang Declaration, said the South’s Unification Ministry, which handles relations with the North, but it was not known which North Korean officials would take part. Unification Minister Cho said Thursday before departing South Korea that a meeting with North Korean leader Kim Jong-un hadn’t been fixed, and that he wouldn’t know until he arrived in Pyongyang if one was possible.

The group flew in three government planes from Seoul Air Base in Seongnam, Gyeonggi, on Thursday morning, arriving in Pyongyang about an hour later taking an air route over the Yellow Sea.

An official at the Unification Ministry who spoke on the condition of anonymity said Seoul was planning to share the cost of accommodations with those participating from the South’s private sector, stressing that such payment won’t violate United Nations Security Council resolutions because they were aimed at the “restoration of national homogeneity.”

The official said the ministry tentatively decided to allocate about 280 million won ($248,000) from state coffers, though a precise figure will be released when the delegation returns home.

Lee, chairman of the ruling Democratic Party, said he was scheduled to meet Kim Yong-nam, North Korea’s nominal head of state who also serves as president of the Presidium of the Supreme People’s Assembly, the regime’s rubber-stamp legislature, to discuss holding a meeting between the two countries’ parliaments by the end of this year.