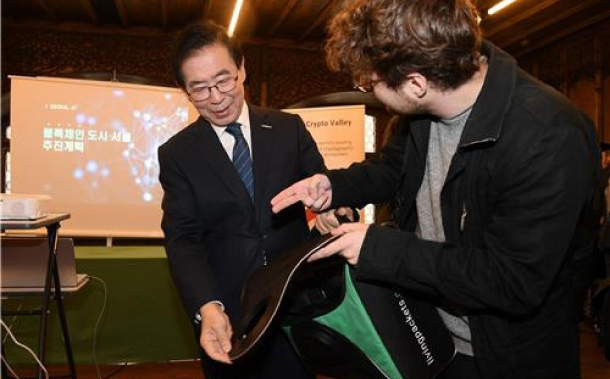 Seoul Mayor Park Won-soon, left, examines a package carrier that uses blockchain technology developed by LivingPackets at the city hall of Zug, Switzerland, on Wednesday. He met with representatives of start-ups that use blockchain technology. [SEOUL METROPOLITAN GOVERNMENT]

ZUG, Switzerland - Seoul will conduct a broad campaign to add blockchain technology to many aspects of the city’s government over the next five years, Seoul Mayor Park Won-soon said on Wednesday.

“It is the plan of the Seoul city government to create an ecosystem of blockchain here, with hopes that the city will be globally recognized as a blockchain hub,” said Park at Zug city hall in Switzerland. “We will try to attract many blockchain experts into Seoul, just like Zug. For this, we will need to establish an environment that is friendly for innovative blockchain companies.”

Park addressed a group of reporters and blockchain experts in Zug as part of his nine-day long trip in Europe. He is exploring various cases of urban development, social economy and smart city planning.

Zug is home to around 32,000 registered companies, according to the Canton of Zug. Many of them use blockchain technology. Blockchain is a data storage system in which information is saved in publicly distributed ledgers rather than on a centralized system.

“With 30,000 inhabitants in the city of Zug, it is a pretty small place but we have a growing number of companies that develop blockchain technology and the ecosystem for it,” said Roman Weiss, official of the economic promotion department at the Canton of Zug.

The rapid growth in blockchain and cryptocurrency industries in Zug has earned the city the nickname “crypto valley.” The city of Zug conducted a municipal vote using blockchain technology this past summer, the first vote of its kind in Switzerland.

To foster the development of blockchain industries in Seoul, the city government plans to set up spaces within the Gaepo Digital Innovation Park in Gangnam District, southern Seoul, and the Seoul Innovation Hub in Mapo District, western Seoul, for blockchain companies.

“A total of 200 blockchain companies will be able to use the space in Gaepo Digital Innovation Park and the Seoul Innovation Hub by 2021,” the Seoul Metropolitan Government said in a statement on Wednesday. “In the Gaepo Digital Innovation Park, we intend to build a separate blockchain building by 2021 to attract start-ups, small and medium-sized companies as well as conglomerates working in the field both in and out of the country to do more R&D work in the sector.”

It also set up a fund for small and medium-sized blockchain companies struggling to launch their businesses. An eligible company can receive up to 1 billion won in support, according to the city government.

Seoul will also experiment with blockchain technology in 14 projects over the next five years.

“Part of the plan is to implement blockchain technology in the city’s administrative processes, which will set a precedent for all cities in Korea,” said Mayor Park. “Seoul is truly a testbed city for the technology. And I think if anyone, the city government of Seoul should lead this innovation.”

One of these projects involves using blockchain technology with an existing online voting platform and an online policy recommendation platform, which were both developed by the city government.

“With the application of the blockchain technology to the voting platform, we will be able to prevent anyone from tampering with the vote online. This will boost the confidence of the voters and residents of Seoul in the vote results,” the city government said in its statement.

Blockchain technology theoretically also enables the secure sharing of information, because any attempt to tamper with the information becomes quickly visible. The ledger-like storage of information is distributed to all stakeholders.

“There are about 1.15 million people in Seoul who receive various welfare funds, like basic pensions, welfare support for those with disabilities and more,” Park said. “The paper work can be complicated because one needs to submit information about one’s background and identification to various governmental agencies to receive welfare support. With blockchain technology, different government agencies can share information about the person securely. He or she does not have to go through the troubles of visiting every government agency involved to file the paperwork.”

“In a blockchain system, any attempt by a government official to, say, leak information about an individual will quickly become visible as well,” said Kim Tae-kyoon, director-general for IT at the Seoul city government.