Top envoy plays down inventory ahead of Pompeo’s visit

Top envoy plays down inventory ahead of Pompeo’s visit 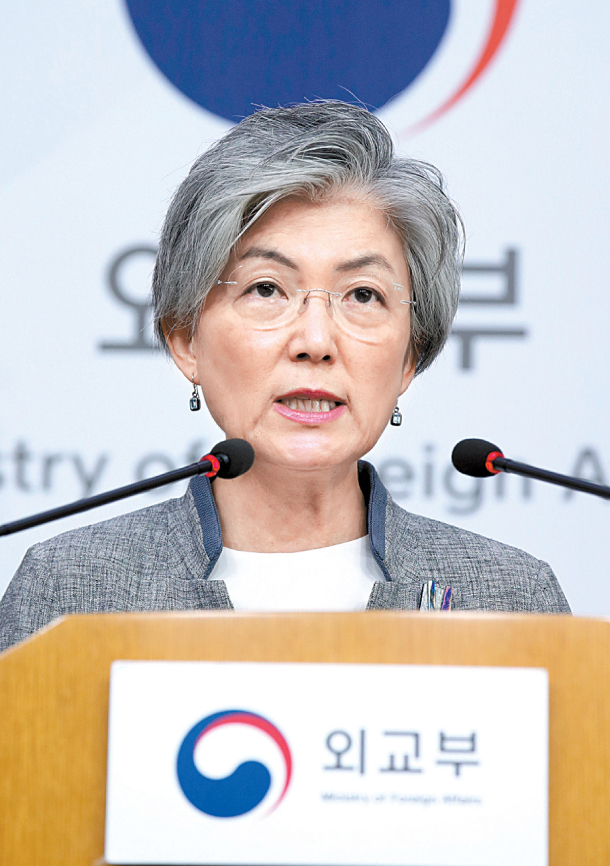 Foreign Minister Kang Kyung-wha gives a news briefing on the denuclearization negotiations in the Foreign Ministry in central Seoul on Thursday. [YONHAP]

Seoul is calling for flexibility in North Korea denuclearization talks, proposing that Washington hold off on a demand for an inventory of North Korea’s nuclear arsenal and accept as a next step the verified dismantlement of the Yongbyon nuclear complex, according to South Korea’s top diplomat.

“A declaration and verification [of the nuclear arsenal and facilities] is, of course, necessary and an essential part of denuclearization,” said South Korean Foreign Minister Kang Kyung-wha at a press conference in Seoul Thursday. “However, at what point in denuclearization it should happen is something that has to come out of negotiations between the United States and North Korea.”

Instead, Kang underscored that “flexibility is needed to match measures needed to realize denuclearization to corresponding measures needed by North Korea.” She added that the outcome of U.S. Secretary of State Pompeo’s visit to Pyongyang Sunday “will be an important yardstick” of progress in North-U.S. nuclear talks.

Kang told the Washington Post in an interview published Wednesday that the dismantling of the Yongbyon complex would be “a huge step forward for denuclearization” if they “do that in return for America’s corresponding measures, such as the end-of-war declaration.”

Washington has been reluctant to agree to a declaration to end the 1950-53 Korean War, which ended with an armistice agreement, as Pyongyang has been calling for as a guarantee of the security of its regime. South Korean President Moon Jae-in has said he would like such a declaration by the end of the year, but Seoul has admitted that such a declaration would be a political decision rather than a legally binding treaty.

The Washington Post interview was conducted last week during Kang’s visit to New York to attend the UN General Assembly, and Seoul’s top envoy recollected past experiences when Washington’s demand for a list of North Korea’s nuclear stockpile and a verification process bogged down denuclearization efforts. Kang told the newspaper that while an inventory will be necessary in the future, that “point can be reached more expeditiously by action and corresponding measures that give the two sides sufficient trust.”

Kang cited as an example the deterioration of negotiations between North Korea and the George W. Bush administration after Pyongyang handed over extensive documents on its main plutonium-related facilities in 2008.

Moon and North Korean leader Kim Jong-un held their third summit last month in Pyongyang, and in the inter-Korean Pyongyang Declaration of Sept. 19, North Korea said it would permanently dismantle its Tongchang-ri missile engine test site and launch platform under the observation of international experts. It further stated it was willing to “take additional measures,” such as the permanent dismantlement of the nuclear facilities in Yongbyon - if the United States takes “corresponding measures.”

The key Yongbyon nuclear complex in North Pyongan Province is where a 5-megawatt plutonium production reactor is located along with at least one uranium enrichment facility.

U.S. Secretary of State Mike Pompeo is scheduled to meet with North Korean leader Kim in Pyongyang Sunday, which could break the impasse in denuclearization talks since the June 12 Singapore summit between Kim and U.S. President Donald Trump.

He will fly to Seoul later Sunday to brief Kang on the results of the talks and also pay a courtesy call on President Moon.

A denuclearization process usually includes as a first step the declaration of a country’s nuclear stockpile, necessary for inspections by foreign experts, such as the International Atomic Energy Agency (IAEA). Kang’s proposal to put off the declaration seems to be aimed at speeding along the denuclearization talks. It is not clear how Washington responded, but Kang acknowledged that South Korea and the United States may not always have the same ideas.

But Kang noted that the two Koreas and the United States “share the willingness to realize denuclearization at an early date” and that Kim Jong-un emphasized to Moon “his intention to focus on North Korea’s economic development after achieving complete denuclearization.”

“The fundamental distrust existing in the North Korea situation makes it different from the denuclearization processes of other countries,” she said, referring to Kazakhstan, South Africa and Ukraine, which gave up their nuclear weapons and subsequently were inspected by the IAEA.

“The North and the U.S. have 70 years of mistrust, so it is fundamentally a much more difficult situation trying to achieve denuclearization along with building trust,” Kang continued. “That is why confidence-building has to go alongside [this process].”

Kang said that United States “also has a certain degree of flexibility in its approach” and can also accept “another corresponding measure” other than the dismantling of Yongbyon.

“What that will turn out to be, will just have to wait for the outcome of Secretary Pompeo’s Pyongyang visit,” she said.

She added, “The end-of-war declaration has already been mentioned a lot, and the South Korean and U.S. sides have already discussed this topic plentifully, and the North and U.S. are also discussing it.”

North Korea has been raising its demand for the United States to ease sanctions in the days leading up to Pompeo’s visit, on which a second summit between Trump and Kim may be arranged.

An opinion piece published by North’s state-run Rodong Sinmun Thursday said that it will be “none other than [the United States] who will be disadvantaged by the sanctions.” It emphasized that sanctions are “a major source of our mistrust of the United States.”

Just days ago, North Korean Foreign Minister Ri Yong-ho, in an address to the UN General Assembly last Saturday, delivered a similar message, critiquing the United States for “coercive” sanctions which are “lethal to trust-building.”

In a press conference in Washington Wednesday, Pompeo emphasized that Washington will not let up on UN Security Council resolutions and sanctions, despite Russia and China having “some ideas about how we might begin to think about a time when it would be appropriate to reduce them.” He said that the sanctions on the North are “a global commitment” ahead of his talks with Kim Jong-un.

He further denied that a timeline is set for denuclearization, despite a 2021 deadline, to coincide with Trump’s first term as president, previously proposed by Kim.

“This is a long-term problem,” Pompeo said. “We’ve made more progress than has been made in an awfully long time. And importantly, we’ve done so in a condition which continues to give us the opportunity to achieve the final goal, that is the economic sanctions continue to remain in place, the core proposition; the thing which will give us the capacity to deliver denuclearization isn’t changing.”