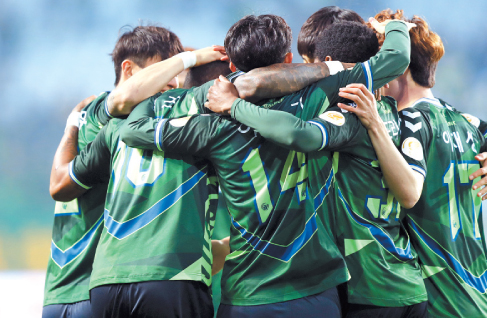 Jeonbuk Hyundai Motors players celebrate a goal against Daegu FC in their K League 1 match at Jeonju World Cup Stadium in North Jeolla on May 2. [YONHAP]

Jeonbuk, led by head coach Choi Kang-hee, is having another successful season. The defending champions have yet to give up the top position in the standings since April and are on the verge of clinching their sixth K League 1 title.

Jeonbuk will face No. 3 Ulsan Hyundai at Munsu Football Stadium in Ulsan on Sunday. Jeonbuk will defend its K League 1 title if it beats Ulsan and second-place Gyeongnam FC fail to collect a win against Jeju United on the same day.

In both cases, Jeonbuk will be the 2018 season champion regardless of remaining matches and will become the first club to clinch the title before the league splits into two echelons.

Korea’s top pro football division operates under a split system, in which 12 teams are divided into two groups after 33 matches and play five more matches within their respective groups. Those in the upper group compete for the league title and spots for the Asian Football Confederation (AFC) Champions League next season, while teams in the lower group focus on avoiding relegation to the second-tier K League 2.

Since the split system was introduced in 2012, no team has clinched the title before the split.

FC Seoul, the 2016 champions, and the Pohang Steelers, the 2013 winners, both secured the league title on the final day of the season. In 2012, the first season with the split system, each team had to play 44 matches and Seoul grabbed the title after playing their 41st match.

Jeonbuk can further cement its top-dog status in the K League if it wins the 2018 season. Winning the current season will deliver Jeonbuk its sixth league title in the last 10 seasons. Jeonbuk will then be one title short of Seongnam FC, which has won the league seven titles.

Since Choi took over the club in 2009, Jeonbuk has not finished below third place. It also won the AFC Champions League in 2016.