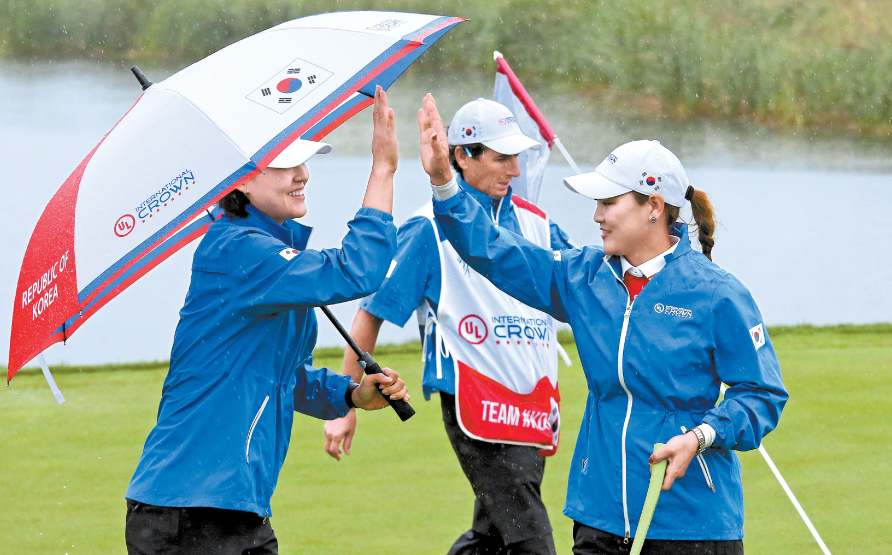 Chun In-gee, left, of Korea hi-fives her teammate Ryu So-yeon during the second round of the LPGA’s UL International Crown golf tournament at the Jack Nicklaus Golf Club Korea in Incheon on Friday. [AP/YONHAP]

INCHEON — Korea split two matches with Australia in the rainy second round of an LPGA team competition on home turf on Friday.

Ryu So-yeon and Chun In-gee defeated Minjee Lee and Sarah Jane Smith two and one in the first four-ball match of Round 2 at the UL International Crown at Jack Nicklaus Golf Club Korea in Incheon.

Park Sung-hyun and Kim In-kyung couldn’t follow that up with a win for the host country, as Katherine Kirk and Su Oh beat them three and two on the par-72, 6,508-yard course.

The eight nations in action are divided into two groups. Korea is in Pool A with England, Australia and Chinese Taipei. The Pool B nations are the United States, Japan, Thailand and Sweden.

Korea won both of its matches on Thursday to take an early lead in Pool A, but England won its two matches early Friday to reach the top of the standings with seven points, one better than Korea. Australia has three points, and Chinese Taipei has zero.

In the four-ball match, players each hit their own ball, and the better score of the two is that team’s score for the given hole.

Each match victory is worth two points, and a half (a tie) is good for one point.

Ryu and Chun had a three-up lead with five holes to play, before Lee won the 14th and 15th holes with consecutive birdies and made it only 1-up for Korea. But Ryu made a match-clinching birdie at the par-three 17th, securing her second straight victory with Chun as her partner.

Park and Kim never led against Kirk and Oh. Kirk gave Australia a one-up lead with a birdie on the opening hole, and she and Oh opened a three-up lead through 12 holes.

Korea finally won a hole at the 14th with Kim’s birdie — the first birdie by either of them all day — but Kirk restored a three-up lead for Australia with a birdie at the 15th. The best the Koreans could do was halve the match by winning the next three holes, but they only matched Oh’s par at the 16th with pars of their own.

In the other second-round matches, the defending champion, the United States, collected two breezy victories over Thailand. It was Jessica Korda and Michelle Wie over Moriya Jutanugarn and Pornanong Phatlum six and four, and Cristie Kerr and Lexi Thompson getting past Ariya Jutanugarn and Sherman Santiwiwatthanaphong four and three.

The Americans lead Pool B with six points.

In Pool A, England won both of its second-round matches against Chinese Taipei.

Bronte Law and Jodi Ewart Shadoff of England beat Candie Kung and Phoebe Yao of Chinese Taipei six and four, and Charley Hull and Georgia Hall joined their teammates in the win column with a two and one victory over Hsu Wei-Ling and Teresa Lu.

The LPGA moved up Friday’s opening tee times by about two hours in anticipation of inclement weather over the weekend caused by the approaching Typhoon Kong-rey.

Soon after the completion of their second round on Friday, all eight nations were scheduled to begin their third round, which was originally scheduled for Saturday.