Ryu Hyun-jin shines in first game of the playoffs

Ryu Hyun-jin shines in first game of the playoffs 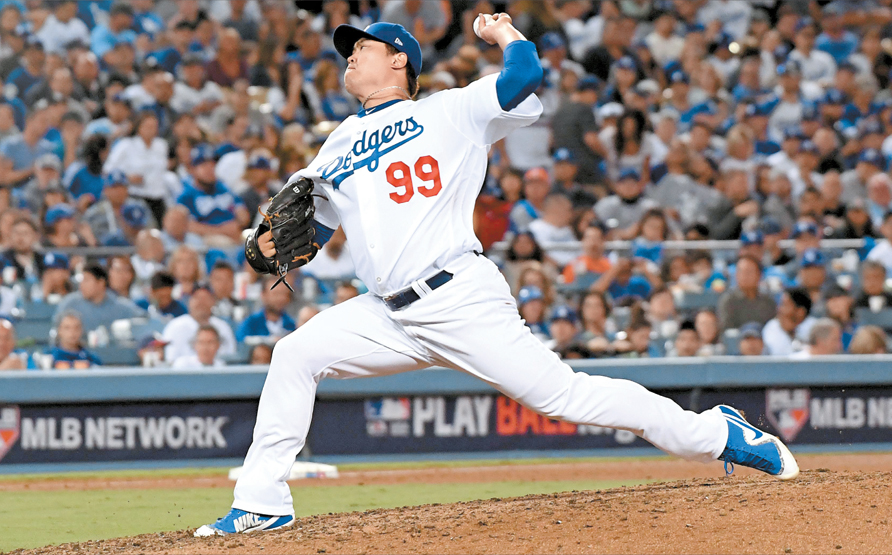 Ryu Hyun-jin of the Los Angeles Dodgers throws a pitch against the Atlanta Braves in the top of the first inning of Game 1 of the National League Division Series at Dodger Stadium, in Los Angeles, on Thursday. [AP/YONHAP]

Ryu tossed seven shutout innings against the Atlanta Braves at Dodger Stadium in Los Angeles in Game 1 of the National League Division Series (NLDS), helping his club to a 6-0 victory.

The left-hander gave up just four singles and struck out eight without walking anyone, justifying manager Dave Roberts’ choice to start him ahead of three-time Cy Young Award winner Clayton Kershaw in the ever-important Game 1.

This was his second postseason start with at least seven scoreless innings. He joins Sandy Koufax, Jerry Reuss and Orel Hershiser as the only Dodgers to do so multiple times.

The Dodgers have been in the postseason every year since Ryu made his big league debut in 2013, but Ryu’s previous postseason outing came in 2014. He was limited to one regular season start in 2015-2016 following shoulder and elbow operations and was left off the Dodgers’ postseason rosters in 2017 as they made it to the World Series.

This year, Ryu was outstanding down the stretch in September, winning his final three starts and limiting opponents to one earned run in 19 innings. He got the nod for the NLDS opener on five days’ rest and picked up right where he left off.

Ryu worked around a two-out single by Freddie Freeman in the top of the first inning. He then retired the side in order in the second inning and recorded his first strikeout by getting Tyler Flowers to strike out on a 1-2 curve.

The Dodgers’ leadoff man Joc Pederson gave his starter a 1-0 lead with a solo shot in the bottom of the first off starter Mike Foltynewicz. Then in the bottom second, the Dodgers gave Ryu a 4-0 lead, as Max Muncy launched a three-run home run, also against Foltynewicz.

Ryu did his part on the mound in the top of the third, as he picked up two more strikeouts in the three-up, three-down frame.

Ryu cruised through the fourth inning, with two groundouts and a strikeout.

After Freeman’s single in the first, Ryu sat down 12 straight batters before Ender Inciarte’s single with two outs in the fifth.

Charlie Culberson followed that hit with a single of his own, as the Braves had a man in scoring position for the first time.

Ryu got out of that jam by getting pinch hitter Kurt Suzuki to fly out to shallow right field.

The Dodgers’ offense gave Ryu more breathing room in the bottom sixth when Kike Hernandez blasted a solo homer off Brad Brach, the fourth Atlanta pitcher, for a 5-0 Dodgers lead.

Ryu gave up a two-out single to Ozzie Albies in the top seventh but fanned Inciarte on a 2-2 fastball for his final out of the evening.

Rookie lefty Caleb Ferguson took over the mound for a clean eighth. After the Dodgers added a run for a 6-0 lead, Alex Wood and Dylan Floro combined for a scoreless ninth to close out the Braves.

Ryu’s ERA in 10 home starts this year is 1.02. Should the series go the distance, the Dodgers will once again have an interesting decision to make between Ryu and Kershaw — who would be on four-days rest in that case — as Game 5 starter.

The Braves had the second-best on-base plus slugging percentage (OPS) against left-handers in the NL this regular season at .780, but Ryu kept them off balance from start to finish with his full arsenal of pitches.

Of Ryu’s eight strikeouts, seven were of the swinging variety. Overall, Ryu got three strikeouts with his fastball, two with a cutter and one each with a slider, curve and changeup.

Ryu showed fine command with his secondary pitches and gave the Braves a steady dose of curves, changeups and cutters on first pitches.

He induced soft contact after soft contact. In his stretch of retiring 12 consecutive batters from the end of the first to middle of the fifth inning, Ryu got six groundouts and five strikeouts against just one flyout. Other than four singles, only four batted balls against Ryu even left the infield.

At the plate, Ryu got a single off Sean Newcomb in the bottom of the fourth for his first postseason hit.