Inflation hits highest level in a year in September

Inflation hits highest level in a year in September 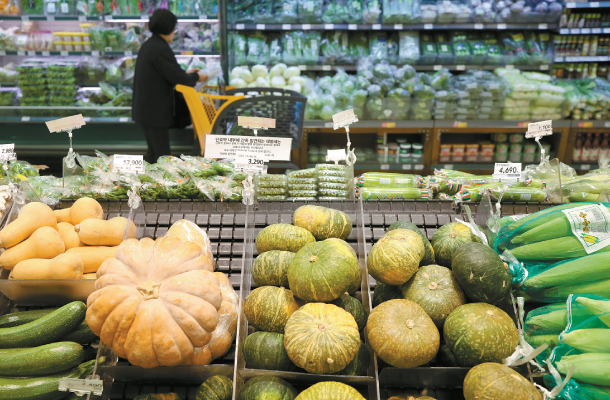 Vegetables are offered for sale at an Emart in Seoul on Friday. Vegetable prices rose in the double-digits in September compared to a year ago. [YONHAP]

Korea’s growth in consumer prices hit the highest level in a year in September.

The on-year rise was the highest since September 2017, when the comparable figure was 2.1 percent.

The September figure was below the Bank of Korea’s target of 2 percent for the year.

Still, the upturn in inflation could support an interest-rate hike as the central bank was waiting for stubbornly low consumer prices to go up to raise its benchmark interest rate.

The statistics office said prices for services moved up 1.4 percent last month, the same rate as in August. Following a surge in prices of vegetables, the government said it would make efforts to stabilize the country’s consumer prices by increasing supply.

“September’s consumer price growth accelerated due to a rise in prices of agricultural products and the tapering off of a one-time cut in electricity bills,” Vice Finance Minister Ko Hyeong-kwon said in a policy review meeting.

“The government will control consumer prices via a rise in supply,” he said.

As to rising oil prices, the government said it will monitor global oil prices and redouble efforts to stabilize them.