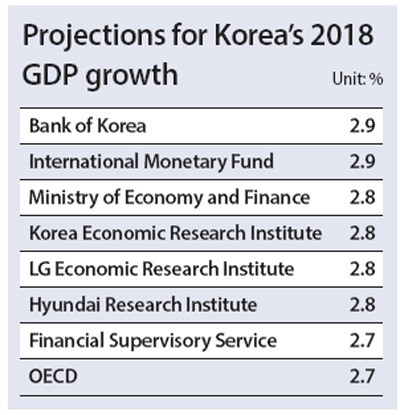 Predicting growth in Korea’s gross domestic product (GDP) has long been the preserve of the central bank.

But now, the country’s financial is getting into the tricky business of figuring out the nation’s near-term economic prospects.

The Financial Supervisory Service said Friday that it has developed a new big data-based metric to produce early GDP estimates by benchmarking a model used by the New York Fed’s Nowcast.

Using the new model dubbed K-SuperCast, the watchdog could be able to provide a monthly GDP growth forecast - more frequent than the Bank of Korea’s quarterly announcement.

The method uses more than 80 economic indicators ranging from employment and household incomes to confidence surveys and housing prices.

The FSS said that the primary use of the database is for analyzing the soundness of financial companies.

“We plan to use the GDP growth forecast and the analysis for the factors affecting the GDP when conducting stress tests and assessing risk exposure,” said a spokesperson from the Financial Supervisory Service.

“The model is attempting to overcome the limitations of GDP data releases that only occur quarterly,” the spokesperson said.

The agency released a prediction for the country’s 2018 GDP growth earlier this week - at 2.7 percent - which is the same as the Organization for Economic Cooperation and Development (OECD), but is below the Bank of Korea’s forecast of 2.9 percent.

The central bank will likely revise its projection downward in the monetary policy meeting set for Oct. 18 in the face of bad data on jobs and exports.

The FSS showed confidence in its new initiative, saying that its twelve out of 16 test runs had a 95 percent confidence interval when compared to projections by the Bank of Korea.

A confidence interval is the probability that a value will fall between an upper and lower bound of a probability distribution. The higher the percentage is, the greater the accuracy.

The agency plans to make its GDP data public and expand the use of K-SuperCast to track other economic indicators and the real estate market in the future.