LEE GA-YOUNG
The author is an international news reporter at the JoongAng Ilbo. 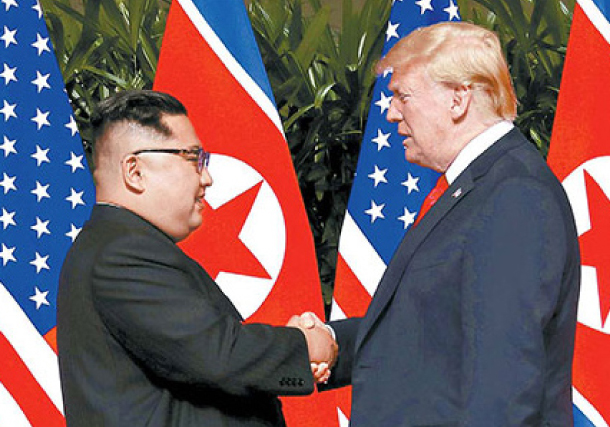 On Oct. 2, I visited the Hay-Adams in Washington, a 90-year-old hotel close to the White House with a view of the Oval Office. Off The Record, the hotel’s bar in the basement, is known as a social salon for politicians and journalists. It is also famous for the caricatures of famous people on its walls and coasters.

The coasters are filled with “trendy” figures. Recently, North Korean leader Kim Jong-un’s face was included, and he was shown pouring a “Bomb” Bay gin martini. While U.S. President Donald Trump said he fell in love with Kim, I feel like Washington still looks at him like an unstable rocket man.

At the end of September and in early October, the United States was busy with the UN General Assembly and corresponding diplomatic schedules. But what really shook the United States was not foreign policy issues like North Korea’s nuclear program but Supreme Court Justice nominee Brett Kavanaugh. The nation was divided. A professor accused the nominee of attempting sexual assault 35 years ago, and Kavanaugh claimed he was innocent. I felt insecure in one part of my mind, because of the different temperament of the U.S. media dealing with news on Kavanaugh and North Korea. When South Korean President Moon Jae-in addressed the United Nations on Sept. 26 and North Korean Foreign Minister Ri Yong-ho spoke on Sept. 29, each called for an end-of-war declaration in exchange for North Korea’s denuclearization.

Some in the media reported on their concerns, but they did not show much interest. After Trump’s UN address on Oct. 26, there were only two questions on North Korea out of 44 questions for 81 minutes at the press conference.

As I passed by the Trump Hotel and reached the Woodrow Wilson Center, I was reminded of a memory that provoked my anxiety. Three years ago, I covered the U.S. visit of then-Saenuri party head Kim Mu-sung. He spoke to Korean Peninsula experts at the Wilson Center and prepared answers to questions on North Korea nuclear issue. However, people in Washington showed more interest in how Korea could forge relationships with the United States, Japan and China. The 90-minute address and Q&A were enough for me to confirm that Washington was growing distant from the Korean Peninsula and the North Korean nuclear issue. The North Korea policy of the Obama administration at the time was described as “strategic patience.” Tae Yong-ho, a North Korean defector who was a diplomat in Britain, claimed that North Korea considered strategic patience to be an excuse for nuclear development.

I found that the North Korean nuclear issue and Kim Jong-un were hot interests for Trump, but they provoked skepticism among American politicians and garnered little attention from the media and citizens. If denuclearization progresses slowly, Trump’s attention on the issue will diminish, as he has been quick to fall in and out of love all his life. The atmosphere in the United States may go back to what it was three years ago.