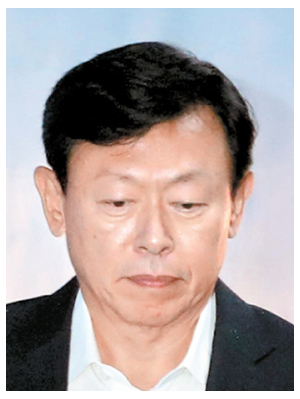 Lotte Group’s chairman, Shin Dong-bin, has been released from prison after a court replaced its earlier prison sentence with a probation.

On Friday, the Seoul High Court, while reaffirming its guilty verdict on charges that Shin bribed former President Park Geun-hye, suspended its earlier 30-month prison sentence and replaced it with four years of probation.

The court said it reduced the penalty against the retail conglomerate’s chairman because he was responding to demands for money made by or on behalf of President Park, and that refusing to respond would have resulted in harm to Lotte’s business activities.

But the court added that, although Shin’s ability to resist was limited under the circumstances, he was still required to accept legal responsibility for providing the bribe.

Lotte Group, in a statement, said it respected the “wise decision” made by the court.

“Lotte will act on projects that weren’t able to proceed smoothly [since Shin was jailed] and will work harder to become a company that not only contributes to the nation’s economy but also commits to social responsibility,” the statement read in part.

Last month, Lotte employees submitted a petition asking for the release of its chairman on the grounds that his absence was affecting Lotte’s business, with major decisions on hold and investment and recruitment scaled back.

The Lotte Group chairman was tried on two charges: the first of bribing President Park through her close friend and confidant Choi Soon-sil, and the second of management corruption.

Shin was accused of donating 7 billion won ($6.8 million) to a sports foundation that Choi created in exchange for restoring Lotte’s duty-free business licenses, which it had been stripped of earlier. He was also accused of inflicting 77.8 billion won worth of damage on Lotte Group by providing 50.8 billion won payments to members of the founding family with phantom employee compensation.

Chairman Shin’s older brother, Shin Dong-joo, is accused of taking 40 billion won while their father’s mistress and her daughter are said to have received 10 billion won in phantom wages.

The patriarch, Shin Kyuk-ho, was originally sentenced to four years on embezzlement and dereliction of duty charges, but the sentence was reduced to three years and a 3 billion won fine by an appeals court. He was accused of having directed the “employee” payouts and of profiting from Lotte Cinema’s concession income.