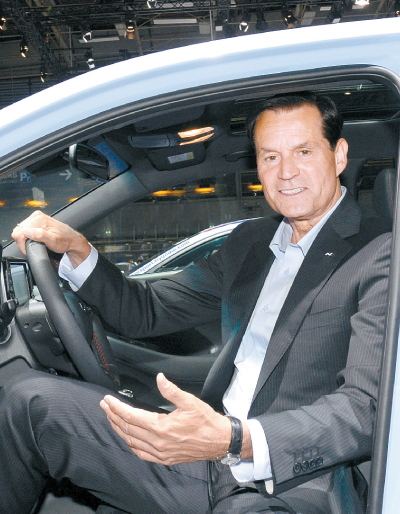 PARIS - Hyundai Motor is planning to build a driving center in Korea as early as next year in its ambition to have its high-performance division compete with BMW’s M and Mercedes-Benz’s AMG models.

“I am considering building a driving academy where customers are invited to experience high-performance cars,” Thomas Schemera, head of Hyundai Motor’s high-performance division, told Korean reporters at the Paris Motor Show on Thursday. “I believe interacting with customers and listening to their feedback are important.”

Schemera also added that the first center is most likely to be built in Korea before the automaker expands to other parts of the world like the United States or Europe.

Schemera, formerly in charge of BMW’s M series, was appointed executive vice president of Hyundai Motor to head its high-performance vehicle and motorsport division in March.

Hyundai Motor’s N series is a latecomer in the industry, as its initiative of launching a high-performance lineup only became official in 2015. BMW’s M series, one of Hyundai’s strongest competitors in high-performance motoring, began in the 1970s.

Yet, Hyundai’s N series sales figures are quite impressive so far. Since its launch in Europe in the second half of 2017, the first model - the i30 N - sold 3,771 units this year through August. This is already 35 percent above the initial sales target for this year, which was 2,957 units.

The second in the series - the Veloster N - is doing well, too. Since its launch in July in Korea, it sold 525 units in its first two months. Globally, it sold 4,122 units this year as of August, again surpassing its initial goal of 3,300 units.

The Veloster N team is planning for a U.S. launch before the end of this year. The third in the series - the i30 Fastback N - premiered at the Paris Motor Show, now underway.

“The i30 sales had been on a downturn, but they started to rebound after the launch of the i30 N,” he said. “Not only other N models but also other Hyundai cars in Europe will likely see improved sales.”

Ahead for the N series, Schemera hinted there would be an eco-friendly engine for its lineup, perhaps an HEV, PHEV or even a hydrogen engine.