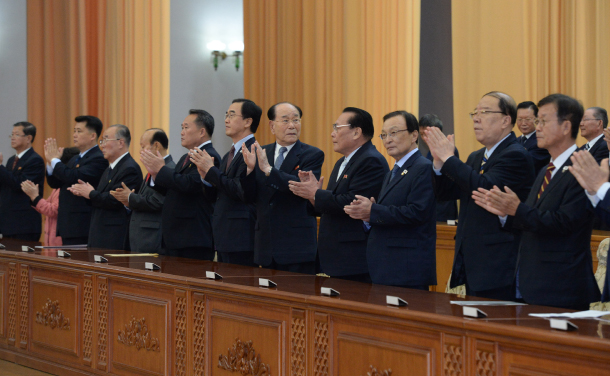 North and South Korean officials celebrate the 11th anniversary of the Oct. 4 Declaration signed at the 2007 inter-Korean summit during a joint event at the People’s Palace of Culture in Pyongyang Friday. Standing sixth from right are Ri Son-gwon, North Korea’s chairman of the Committee for the Peaceful Reunification of the Country of the DPRK; Cho Myoung-gyon, South Korea’s unification minister; Kim Yong-nam, North Korea’s nominal head of state, who also serves as president of the Presidium of the Supreme People’s Assembly; Kim Yong-dae, vice president of the Presidium; and Lee Hae-chan, chairman of the South’s ruling Democratic Party, who is also the chairman of the board of directors of the Roh Moo Hyun Foundation. [JOINT PRESS CORPS]

South and North Korea vowed to follow through on the two declarations their leaders signed in April and September during a joint ceremony in Pyongyang Friday, promising a more peaceful and prosperous future.

The show of reconciliation came during an event at the People’s Palace of Culture in Pyongyang marking the 11th anniversary of the Oct. 4 Declaration signed at the 2007 inter-Korean summit between former South Korean President Roh Moo-hyun and then-North Korean leader Kim Jong-il.

The event Friday in Pyongyang was a follow-up to the Pyongyang Declaration signed by South Korean President Moon Jae-in and North Korean leader Kim Jong-un on Sept. 19 in their third summit, which partially states that the countries agreed to hold “meaningful events” to celebrate the 11th anniversary of the Oct. 4 Declaration.

It was the first time the two Koreas held a joint ceremony to celebrate the signing of the Oct. 4 Declaration.

A 160-member delegation from South Korea, including government officials, politicians, civic group members, reporters and people from the private sectors flew to Pyongyang on Thursday to attend the event, and was expected to return to Seoul today.

Kim Jong-un did not appear in the event. Some 3,000 others did, including Kim Yong-nam, North Korea’s nominal head of state who also serves as president of the Presidium of the Supreme People’s Assembly, the regime’s rubber-stamp legislature, as well as Ri Son-gwon, chairman of the Committee for the Peaceful Reunification of the Country of the DPRK, a cabinet-level agency overlooking inter-Korean relations.

Ri specifically called for South Korea to start work on connecting the two countries’ railways and roads. He also urged the re-opening of the Kaesong Industrial Complex and Mount Kumgang resort, all of which are cross-border projects that Seoul had been wary to resume, given the international sanctions on the regime.

Cho Myoung-gyon, South Korea’s unification minister, who oversees relations with the North, said inter-Korean ties were rising to new heights and that both countries were building a future that no one has ever experienced since the peninsula was bifurcated decades ago.

The two countries adopted a joint agreement to “thoroughly” implement both the April 27 Panmunjom Declaration, signed in Moon and Kim Jong-un’s first summit, and the Sept. 19 Pyongyang Declaration.

After the ceremony, the South Korean delegation had lunch at the famous Okryu Restaurant, where they enjoyed naengmyeon, or cold noodles. In the afternoon, they were escorted to the Mansudae Art Studio for a tour of sculptures and artworks, after which they watched a mass gymnastics performance entitled “The Glorious Country” at the May Day Stadium.

The delegation was planned to return to Seoul this morning on three South Korean government planes.