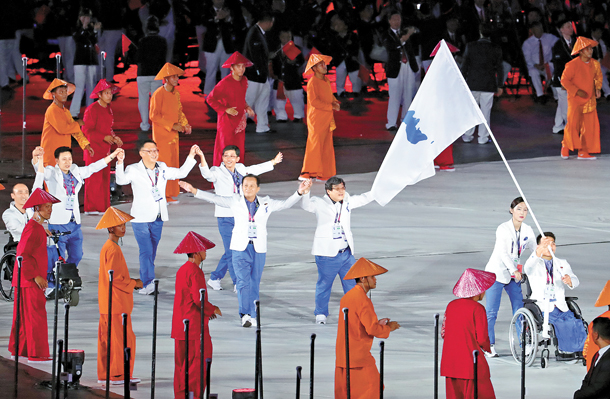 South and North Korean athletes and officials march together at the opening ceremony for the 3d Asian Para Games at Gelora Bung Karno Stadium in Jakarta on Saturday. [YONHAP]

South and North Korean para athletes marched together under a single flag for the first time at the opening ceremony of the 3rd Asian Para Games in Indonesia on Saturday.

Sim is in his third Asian Para Games. He took silver at Guangzhou 2010 and bronze at Incheon 2014. Sim earned North Korea’s first Asian Para Games medal in 2014 when he took bronze in the men’s breaststroke 100 meter event.

This was the first time in para sports history that South and North Korea had a joint parade at an international sports event for the disabled. The two sides previously tried to march together at the opening ceremony at the 2018 Winter Paralympic Games in PyeongChang, South Korea, but the plan was canceled at the last minute.

South and North Korea are also sending unified teams to the Asian Para Games for the first time. The Koreas will join forces in the men’s table tennis team competition and the men’s swimming freestyle relay and medley relay events. The medals earned from those events will be awarded to neither South Korea nor North Korea, but to “Korea.”

The Korean athletes were 14th in line to enter the stadium out of 43 participating nations. When they appeared, South Korea’s vice sports minister Roh Tae-kang, South Korean member of the International Paralympic Committee (IPC) governing body Kim Sung-il, and An Kwang-il, North Korean ambassador to Indonesia, stood up in the VIP section and showed their support to the athletes.

The KPC said 154 South Korean athletes took part with 20 North Koreans in the joint parade at the opening ceremony.

The team’s goal is 33 gold, 43 silver and 49 bronze medals and to finish in third place in the medal standings.

North Korea will be represented by seven athletes in table tennis, swimming and para athletics.

The Para Games runs until next Saturday.