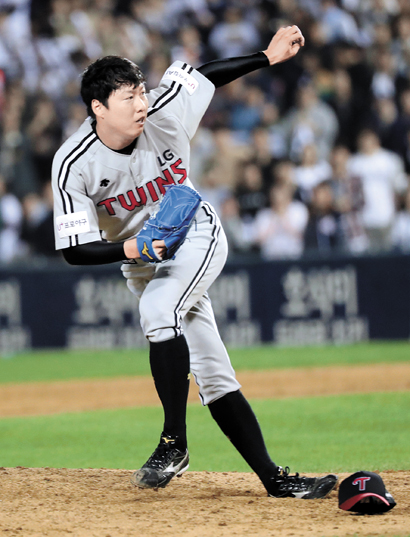 The LG Twins finally ended their season-long losing streak against the Doosan Bears on Saturday, defeating the Bears 3-1 at Jamsil Baseball Stadium in southern Seoul.

During the Twins’ 16th game of the season against the Bears, Twins starter Cha Woo-chan got most of the credit for the turnaround by giving up only one run in his complete-game effort.

Prior to Saturday’s game, the Twins had lost all 15 outings against the Bears this season. If their record is extended from last season, the Twins’ losing streak was 17 games long, beginning on Sept. 10, 2017. That record of futility against a single team ranks second in length in the Korean pro league. The Lotte Giants hold the record for most consecutive losses against a single team - they fell to the Kia Tigers in 18 consecutive games from Sept. 27, 2002, to Sept. 13, 2003.

Cha sparkled on the mound, giving up only two walks, no hits and no runs through the fifth inning. He finished with a four-hit, three-walk effort, giving up only one earned run in the eighth inning. The Bears had their “A” lineup, except for Kim Jae-ho, in the game, perhaps to match the league record for inflicting punishment on another team, but Cha was the dominant force Saturday.

While the Bears struggled against Cha, the Twins’ offense came on strong, scoring three runs against the Bears’ starter Yoo Hee-kwan.

In the ninth, the Bears threatened, and had the bases loaded with two out. They sent Kim Jae-ho to the plate as a pinch hitter, but Cha found some reserves and struck him out on a full count, picking up his 12th win of the season. His 134 pitches during Saturday’s outing was only four off his personal record of 138 pitches in a single game.

“After the eighth inning, I told [the manager] that I wanted to pitch until the end,” Cha said. “I didn’t even look at the bullpen. [Before the game,] I told myself that we had to win today. I was able to pitch a complete game because I had good control of a number of pitches throughout the game.”

This was Cha’s third complete game of his career and his first since he pitched a complete game for the Samsung Lions over eight years ago.

“I’m glad to have won a game that could be the last game of the season for me,” said Cha.

After Saturday’s game, the Twins now only have one more remaining in the regular season. They are one of the first teams to finish their regular season games and are seventh in the standings. It is unlikely that the team will advance to postseason play this year.

“We didn’t have a good record against Doosan [this season] so I’m glad we won,” Cha said.

Although Cha finished his 2018 season strong, his season statistics were less than sterling; he posted a record of 12 wins against 10 losses with a 6.09 ERA.

The Twins will end their regular season campaign against the SK Wyverns at Munhak Baseball Stadium in Incheon on Saturday at 5 p.m.