If they can make it there: BTS conquers N.Y.

If they can make it there: BTS conquers N.Y. 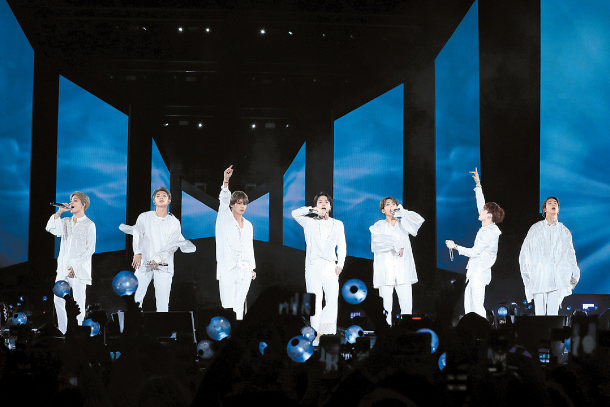 NEW YORK - Just when they thought there was no higher career peak for them to conquer, K-pop sensation BTS took New York by storm Saturday local time, and became the first Korean act to hold a concert at Citi Field in New York. Their fans, who call themselves ARMY, filled up all 40,000 seats of the home stadium of Major League Baseball’s New York Mets.

BTS’s U.S. tour - dubbed “Love Yourself” - began on Sept. 5 in Los Angeles, and stops followed in Oakland, California; Fort Worth, Texas; Hamilton in the Canadian province of Ontario; Newark, New Jersey; and Chicago. New York was the final stop in the group’s month-long journey and its grand finale in the U.S. When tickets to the U.S. tour went on sale in August, all 220,000 tickets for the 15 scheduled concerts were sold out in just 20 minutes. Fans were spotted camping outside Citi Field as early as Monday - six days beforehand - to make sure they got the best spots when wrist-banding for the floor seats began on Saturday morning. An estimated 1,500 people were said to have camped out during the week.

Koreans did not make up a large portion of the attendees. The crowd was a combination of fans of all nationalities with one thing in common: a passion for the seven BTS stars. “I love everything about BTS,” said Taylor Gill, a fan waiting on line outside the concert on Saturday. “The passion that they have shown us has touched me so deeply, and changed everything for me.”

Before the show, some groups staged ad-hoc cover performances of BTS songs as a warm up.

“We couldn’t believe we finally came here to Citi Field,” member J-Hope said during the concert, expressing gratitude to the fans who made it all happen. “One of our dreams has come true,” said group leader RM. The boy band also said their second time hitting No. 1 on the Billboard 200 album chart and an appearance at a United Nations General Assembly meeting were also dreams come true.

The boys began the concert with their latest song, “Idol,” the video of which has garnered more than 200 million YouTube views in 43 days after its release. The video achieved that milestone at 1:13 a.m. Sunday, according to Big Hit Entertainment, the group’s agency. The second version of the music video featuring U.S. rapper Nicki Minaj has garnered 41.2 million views. The 200-million-view feat came faster than any of its other music videos, a day shorter than the “Fake Love” track, which took 44 days.

The group sung “DNA,” “Fake Love” and “MIC Drop” over 150 minutes. As ARMY shouted for an encore, the members came back on stage to perform “So What,” “Anpanman” and “Answer: Love Myself” for the final good-bye.

Performing at Citi Field is perhaps one of the biggest marks for a Korean idol group, following in the footsteps of Sir Paul McCartney, Beyonce, the Zac Brown Band and Dead & Company.

The boys will start their European tour in London at the O2 Arena on Oct. 9 and 10 before concerts in Amsterdam, Berlin and Paris - the tickets to which are all sold out.