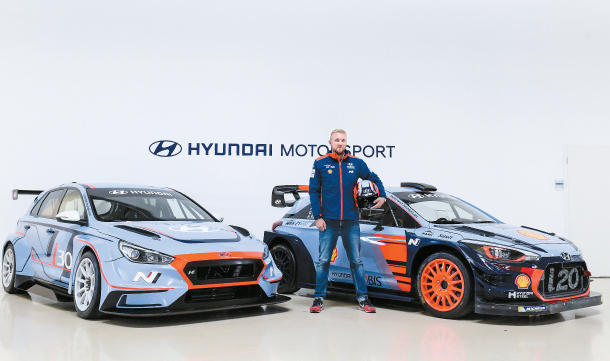 A race driver poses with the i30 N TCR, left and the i20 Coupe WRC at Hyundai Motorsport GmbH in Alzenau, Germany. [HYUNDAI MOTOR]

ALZENAU, Germany - Breaking the hushed ambience inside the white-walled workshop hall, a beastly engine growl roared as a local staff turned on the engine of a partially disassembled Hyundai i20 coupe World Rally Car and stepped on the accelerator.

The vehicle, which was not equipped with tires or doors, was one that had participated in an earlier World Rally Championship (WRC) race.

“Cars that participate in a race receive checkups and upgrades on their return, getting ready for their next one,” Chang Jee-ha, coordinator of customer racing at the facility said on Thursday during a press tour at the headquarters of Hyundai Motorsport GmbH (HMSG) in Alzenau, Germany, about 50 kilometers (31 miles) east of Frankfurt International Airport.

“Core parts like the engine get a thorough microscopic inspection so we can fix things if necessary. One engine lasts for three to four races.”

This workshop is part of HMSG facilities which opened in 2013 for R&D and manufacturing of the brand’s high-performance vehicles that will compete in global car rallies. It is home to some 250 employees and occupies 16,000 square meters of floor area. This is where the group’s executive vice chairman Chung Eui-sun’s ambitions in motorsport, to make the Hyundai brand more vibrant and dynamic, become a reality.

At the entrance to the facility on Thursday, an electronic signboard was counting down the time until the next WRC rally, which was about to kick off in England in less than one hour. It was the 11th rally of the 13 races set for this year; a composite score in those events will decide the winner of the championship for 2018. 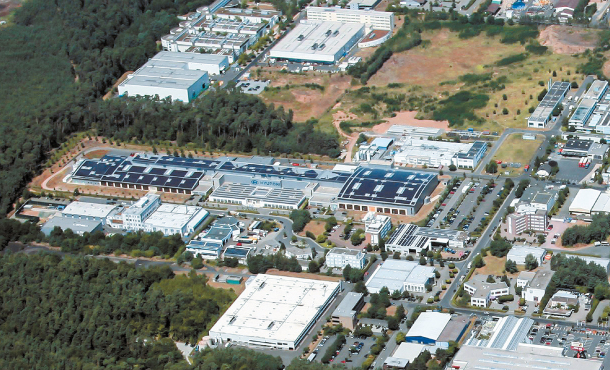 An aerial view of the Hyundai Motorsport complex in Alzenau, Germany. [HYUNDAI MOTOR]

Hyundai Motor, which has been participating in WRC races since 2014, is vying for the No. 1 spot this year for the first time. As of the 10th race, which took place in Turkey in September, the Hyundai Motor team stood in the second spot, following the Toyota team with only five points separating them.

Other competitors include Ford and Citroen.

“We have put everything into this year’s race to take the first spot,” said Chang determinedly.

In order to save time and boost work efficiency, this facility collaborates with an R&D center located in Namyang, Korea to manufacture and upgrade the i20 coupe WRC vehicle.

All that the Alzenau team is sent at first is the chassis manufactured for its mass produced model from its Turkey plant. Researchers here transform the chassis into supercharged racing cars that cost 1 billion won each.

The heart of the car, the engine, is also developed here at the Alzenau facility. According to Hang In-ku, the head researcher at Hyundai WRC, vehicles once relied on engines manufactured for the mass produced models. But now, the Alzenau team designs the engine from scratch and takes about two years to make a new one.

Hyundai Motor says its participation in motorsport has had a positive influence on European sales, presumably due to the huge marketing effect motorsport has among European customers.

WRC races are held on real roads, with asphalt, pebbles, mountains and snow to contend with. They attract an average of 3.6 million live spectators per year, and brand image is a big part of a fan’s appreciation of the sport.

The mass produced i20 model, in fact, has recorded an average yearly growth rate of 7.2 percent for four consecutive years since it started to participate in the races. Last year, it sold 286,241 units, 32 percent more sales than in 2013.

“WRC is the most brand-fitting motor sport at the moment [for Hyundai Motor],” said Stefan Henrich, head of marketing at Hyundai Motorsport as he conducted a press tour of the facility.

“It is the most competitive off-road challenge in the business.”

After the positive response to its WRC participation, Hyundai Motor debuted at the World Touring Car Cup (WTCR) last year. Unlike WRC, where automakers run their own racing team, in the WTCR an automaker supplies its models to professional racing teams. It is categorized as “Customer Motorsports” and Audi, Volkswagen, Ford, Peugeot and Honda participate in these races.

Hyundai Motor has selected its i30 N model for the WTCR race. Two professional teams, the BRC and the Yvan Muller racing teams, have chosen Hyundai’s i30 N TCR model for the race this year, and they are currently ranked one and two in the standings. Ten races take place each year; six have been held so far this year.

“This could be a critical year for Hyundai Motorsport because we could take a dual first place in WRC and WTCR,” said an official from Hyundai Motor.