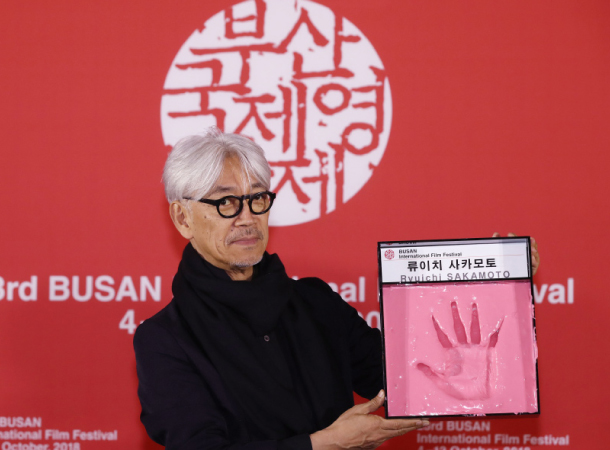 Prominent Japanese musician Ryuichi Sakamoto made his debut in the world of animated films by scoring “My Tyrano: Together, Forever.” A Korea-Japan-China co-production, the animated feature had its world premiere at the 23rd Busan International Film Festival (BIFF) on Friday night.

“I saw the completed version for the first time yesterday,” Sakamoto said during a press conference at the festival on Saturday. “Since I scored the movie without a chance to read the dialogue, I had to resort to my own imagination. So it was a difficult work.”

Directed by Kobun Shizuno, the film depicts the friendship of a lonely Tyrannosaurus rex, Tyrano, and an orphaned baby dinosaur, Punon, as they take a journey together to search for an earthly paradise.

“Many children have come to attend the screening with their parents,” Sakamoto said. “It was a big challenge for me to make music that can be embraced by all generations.”

The composer noted that, because Typhoon Kong-rey was passing over the Korean Peninsula at the time, it rained a lot when the audience was watching the rainy scenes in the movie at the outdoor theater of the Busan Cinema Center, the main venue of the annual festival. “I couldn’t distinguish between what is real and what is not,” he said drawing laughter from the audience. “It was an interesting experience.”

Asked what drove him to join in the project, he said: “There are a few reasons. I found it attractive because it is a joint production among South Korea, Japan and China.” He also mentioned his fondness for films. “Since I like to watch films, I tend to see anything interesting whether it is animation or live action,” he said.

Kang Sang-wook, the Korean producer of the movie, said he thinks there are no barriers in films even though producers and crew are of different nationalities.

“I sought collaboration with Japan, the world’s animation power, to make a fun and quality animation,” he said.

Kang had Sakamoto in his mind when he began promoting the project.

“I told my opinion to Yoshihiro Shimizu, director of Tezuka Productions Co., and he actually asked Sakamoto to do the job,” he said. “I think I was fortunate to make this movie.”

Sakamoto also spoke about his fondness for Korean films. “I like Korean movies a lot, and I was thrilled to see the actors I’ve seen in the movies sitting in the same row as me at the opening ceremony,” he added. “But I’m very sorry that my favorite Korean actress, Kim Tae-ri, didn’t come,” he said, referring to the lead actress of the popular Korean TV drama “Mr. Sunshine.”