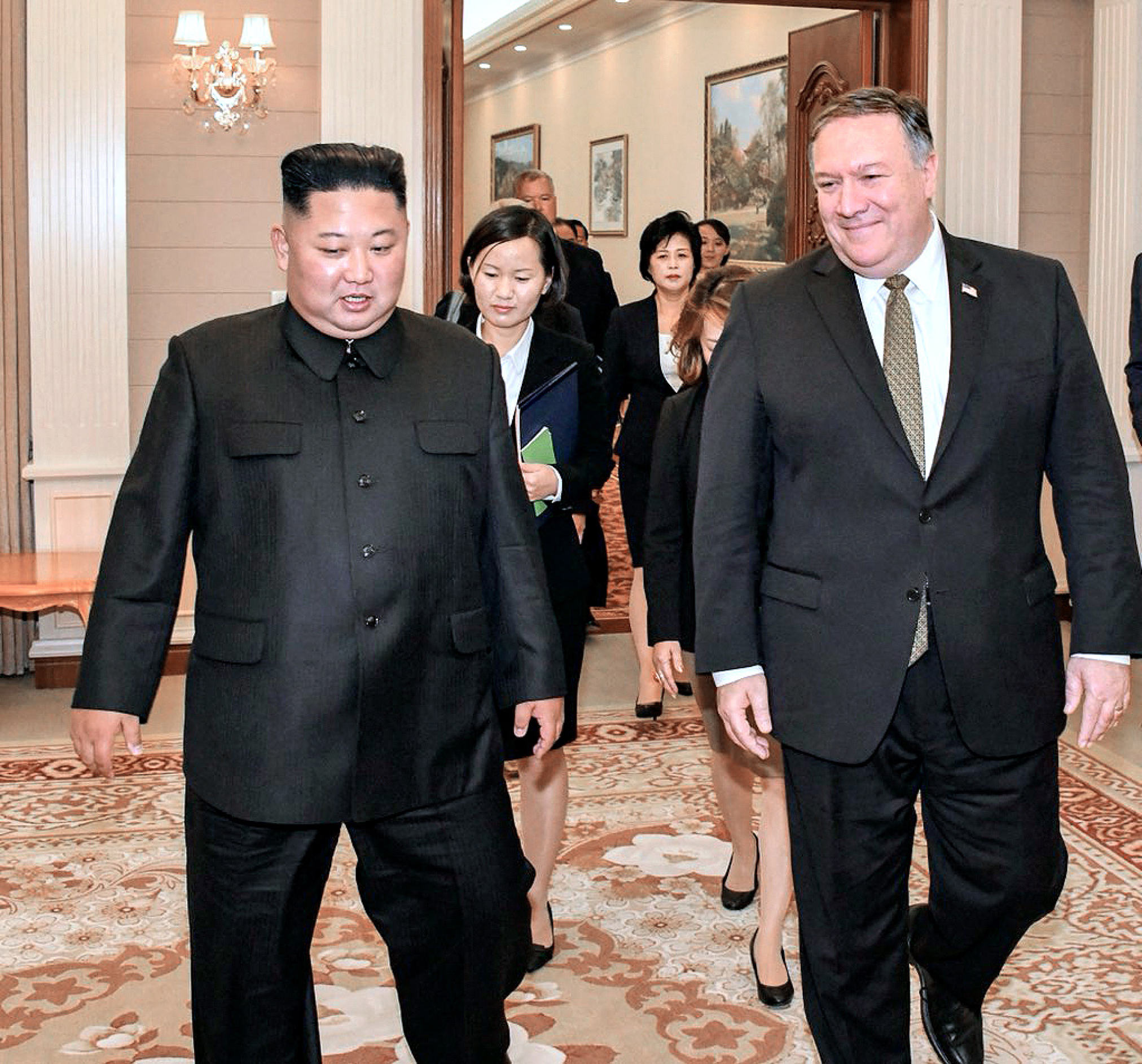 U.S. Secretary of State Mike Pompeo posted this photo on his Twitter account Sunday afternoon that shows him talking with North Korean leader Kim Jong-un in Pyongyang that day. [YONHAP]

U.S. Secretary of State Mike Pompeo made his fourth trip to Pyongyang on Sunday and met with North Korean leader Kim Jong-un to try to get denuclearization talks back on track.

In a tweet posted around 5:15 p.m. Sunday, Pompeo said he “had a good trip to Pyongyang to meet with Chairman Kim.” He posted a picture of himself walking alongside Kim with their interpreters behind them at an unspecified location and time.

“We continue to make progress on agreements made at Singapore Summit,” tweeted the secretary of state, referring to a June 12 summit between North Korean leader Kim and U.S. President Donald Trump during which they agreed to the “complete denuclearization of the Korean Peninsula” but without specific measures on how to go about it. He also thanked North Korea for hosting him and his team from the State Department.

Pompeo touched down in Seoul around 5 p.m. and went to the Blue House to brief President Moon Jae-in on the outcome of his meeting with the North Korean leader hours earlier.

The presidential office had yet to announce the details of Moon’s meeting with Pompeo that began at 7 p.m. as of press time.

The top U.S. diplomat’s visit was watched closely because denuclearization negotiations between Pyongyang and Washington have made little progress.

While details of his meeting with North Korean leader Kim were not announced as of press time, the two, who met for the third time, were expected to have discussed specifics in the denuclearization process, specially what corresponding actions the U.S. could give to the North in return for denuclearization steps.

In the Pyongyang Declaration, produced at a summit between Kim and South Korean President Moon last month, the North agreed to permanently dismantle its Yongbyon nuclear complex - if the U.S. came up with “corresponding measures in accordance with the spirit of the June 12 US-DPRK Joint Statement,” referring to the product of the Singapore summit between Kim and Trump. DPRK is an acronym of the North’s official name, the Democratic People’s Republic of Korea.

One “corresponding measure” could be the issuing of a declaration to formally end the 1950-53 Korean War. The three-year conflict ended in a truce, not a peace treaty, leaving the two Koreas technically at war. The perpetuating status of war on the peninsula is a main reason the U.S. has kept its troops in South Korea since 1953, when the armistice was signed.

The U.S. has demanded the North declare a complete inventory of its nuclear arsenal and facilities as a concrete denuclearization step but Pompeo and Kim could have found some middle ground from their earlier stances at their Sunday meeting.

South Korean Foreign Minister Kang recently weighed in on a framework in which the North would destroy the Yongbyon complex in return for the U.S.’s corresponding actions, saying it would be a “huge step forward for denuclearization” if they “do that in return for America’s corresponding measures, such as the end-of-war declaration” in an interview with the Washington Post conducted during Kang’s visit to New York last month.

Kang told the newspaper that while a nuclear inventory will be necessary in the future, that “point can be reached more expeditiously by action and corresponding measures that give the two sides sufficient trust.”

The North could have also demanded the secretary of state agree to lift UN sanctions targeting the North as a measure of trust building between the two.

Pyongyang repeatedly stated it would not rid itself of nuclear weapons unilaterally without corresponding measures to build a sense of mutual trust, making clear it was waiting for what the U.S. could offer.

“While our resolve to realize denuclearization is unshakable by our government, it is only possible when the U.S. can ensure us to have a sense of trust,” said North Korean Foreign Minister Ri Yong-ho in a UN General Assembly speech on Sept. 29.

Washington has been reluctant to agree to a declaration to end the war, which Pyongyang has been calling for as a guarantee of the security of its regime.

Pompeo and Kim could have also discussed a possible date for a second summit between Kim and Trump. The North is said to have been calling for the second Kim-Trump summit to take place before the U.S. midterm elections on Nov. 6. It worries that the election outcome could make Trump take a harder stance on the North’s denuclearization process.

Pompeo met with Moon to brief him on his meeting with North Korean officials Sunday evening at the Blue House. He was then scheduled to meet with Kang, his South Korean counterpart.

Pompeo, as director of the Central Intelligence Agency, first met North Korean leader Kim in Pyongyang at the beginning of April. He made a second visit to Pyongyang in May, leading up to the historic June 12 summit between Trump and Kim in Singapore, then another trip in early July.

On his third trip, Pompeo did not get a meeting with Kim as denuclearization negotiations hit a deadlock.

On Aug. 23, Pompeo announced the appointment of Stephen Biegun as the State Department’s new special envoy for North Korea and revealed they would both be making a trip to Pyongyang. Trump abruptly canceled that trip the following day, after reportedly learning of a belligerent letter by Kim Yong-chol, vice chairman of the Central Committee of the North’s ruling Workers’ Party, addressed to Pompeo.