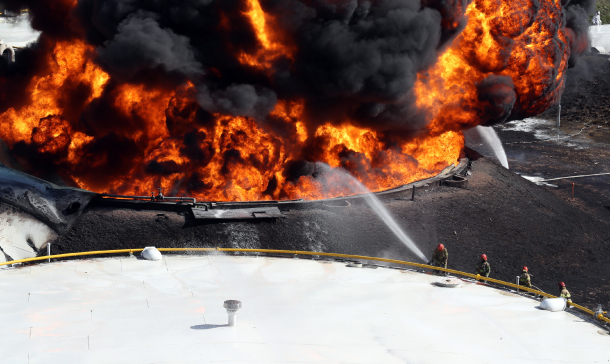 Firefighters struggle to put out a massive blaze on Sunday after an oil tank exploded at a storage station in Goyang, Gyeonggi. [YONHAP]

A massive fire broke out Sunday morning after a gasoline tank exploded at a storage station in Goyang, Gyeonggi, leaving firefighters scrambling to contain the flames from spreading to other nearby tanks.

The Goyang Fire Department was called in after one of the outdoor gas storage tanks belonging to the Daehan Oil Pipeline Corporation exploded at around 10:56 a.m. The blast was likely triggered by the combustion of oil mist that formed in a gas tank, fire authorities said.

The fire had not been extinguished as of press time, nor had it spread to any of the other tanks. A spokesman for the pipeline company said at 5 p.m. that the fire may persist until all the remaining oil in the tank is removed, which he estimated would take around seven hours.

Kim Gwon-un, chief of the Goyang Fire Department, said at an emergency press briefing on Sunday afternoon that firefighters were attempting to weaken the fire by removing the remaining oil inside the burning tank through a waste water disposal device.

Over 4.4 million liters (1.2 million gallons) of gasoline were in the tank when it exploded, said the company spokesman. No casualties were reported, as most of the fueling station’s workers were off work on Sunday.

After assessing the magnitude of the fire, a total of 299 firefighters were deployed to put it out with the help of 111 fire engines and three firefighting helicopters.

Just when the fire appeared to lose some of its strength at around 11:40 a.m. due to firefighters’ efforts, a second explosion took place inside the tank and brought the flames roaring back.

The intensity of the flames made the fire difficult to extinguish. The powerful heat kept the firefighters at a 100 meter (328 feet) distance, said Kim, chief of the Goyang Fire Department. Even water sprayed from the three firefighting helicopters - which are usually deployed to combat wildfires - did little to tame the blaze.

The smoke coming from the fire could be seen over 18 kilometers away south of the Han River in Seoul.

“We are preparing for the possibility of another blast, but additional explosion appears unlikely,” Kim said. “We are doing our best to ensure the fire does not spread to the other outdoor tanks as well as 20 other gas tanks located nearby in underground units.”

With the fire showing little sign of abating until it burns through all the gas in the tank, the fire department at 1:30 p.m. raised its fire emergency warning level to its highest. That warning is only issued when a fire cannot be contained by firefighting personnel of that district and reinforcements from nearby administrative areas must be called in.