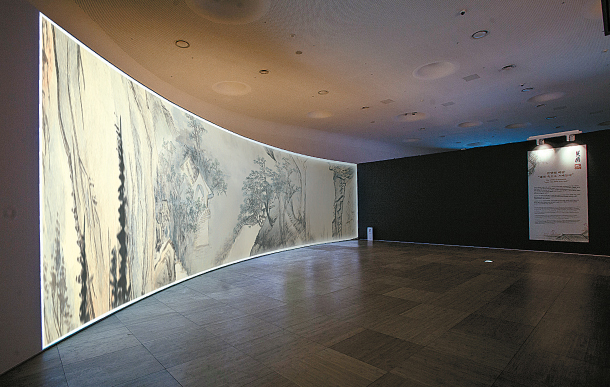 Kim Hong-do was one of the greatest artists of the Joseon era (1392-1910). His works, which ranged from landscapes, portraits and genre paintings to Buddhist paintings, required the most delicate skill. There have been hundreds, if not thousands of exhibitions featuring works by Kim, who was born in 1745 and died in 1806. Now his works have been turned in a multi-media art show, “Kim Hong-do Alive: Sight, Insight” showing at the Yongsan War Memorial, central Seoul, until Feb. 24.

A total of 154 works are on display at the exhibit hall, comprised of 120 digital prints of Kim’s works and 34 video installations. Though the works are not originals, visitors get a chance to see the genius of one of history’s greatest artists in a wholly new way, with motion and energy. There are five different sections: Birch Hill, the Palace, Mount Kumgang, the Streets and Danwon’s (Kim’s pen name) Room.

While Kim Hong-do is best known to later generations for his genre paintings, which captured the subtle moments of the lives of people living in 18th century Joseon regardless of class or gender, his exquisite attention to detail also earned him recognition from the royal palace, which can be seen in his painting series “King Jeongjo’s Royal Procession to Hwaseong.” Kim succeeded in paying attention to every human being and tree in his painting, and the video version adds motion and fun. 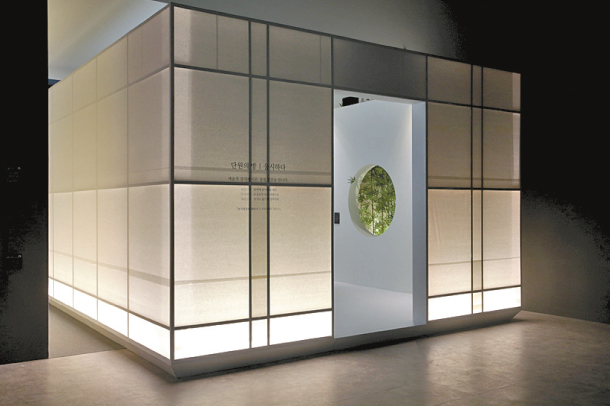 The exhibition finishes with a final section entitled “Danwon’s Room,” above. Danwon was Kim Hong-do’s pen name. [MADE STUDIO]

A remarkable site is the video version of an 8-panel folding screen, retouched versions of genre scenes owned by the Guimet Museum in France. Each screen features stories of different people’s lives in dynamic colors. The last section ends with Danwon’s room, in which the artist looked into himself and became the maestro he was.

“Kim Hong-do strived to find his true self in a chaotic world,” said a staff member from MADE Studio, the organizer of the exhibition. “Audiences of all ages can see the world of Kim Hong-do with this media experience.”

Admission costs 15,000 won ($13) for adults and 12,000 won for students. To get to the Yongsan War Memorial, get off at Samgakji Station, lines No. 4 and 6, exit 12, and walk five minutes. For more information, visit www.kimhongdoalive.com