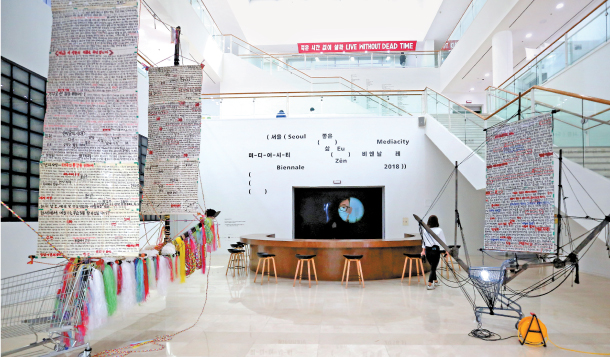 The Seoul Metropolitan Government has upped its focus on design and art in recent years, but the city’s major events for this year have disappointed experts and confused crowds.

“Design Cloud,” an exhibition organized by the Seoul Design Foundation, and the Seoul Media City Biennale at the Seoul Museum of Art (SeMA) both opened in September to decidedly mixed receptions, putting the city government’s approach to public design projects in question.

The concept behind “Design Cloud,” which was held from Sept. 17 to 26 at Dongdaemun Design Plaza in central Seoul, mystified local reporters and visitors.

The event combined the different design-related projects the Seoul Design Foundation held in previous years, such as Design Week, Fashion Week and Upcycling Week. The idea of putting the three events together wasn’t the problem - it was how it came about.

“The ‘Design Cloud’ had to be prepared within just a few months, because it was decided after President Choi Kyung-ran was put into her new post in April,” said an official at the design foundation.

Choi is currently mired in numerous rumors. She allegedly mistreated staff members and used students from Kookmin University to write her proposal for the presidential post while she was a professor at the university, according to a report from The Herald Business. 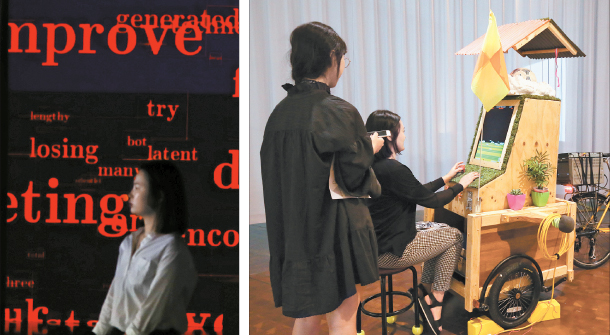 The design foundation went for quantity, not quality, in “Design Cloud.” Four major exhibitions were held: the “Human Cities Design Exhibition,” “Seoul Design Brand Exhibition,” “Design by Dongdaemun” and “Seoul♥SeeYouTomorrow♥Pyongyang.” Each exhibition was organized by different curators, and they received a total of 1.1 billion won ($969,230) from the Seoul Metropolitan Government.

The exhibits, however, lacked consistency and raised questions over where all the money went. The “Human Cities” exhibition, for example, featured just 20 digital panels that show the urban design from around the world that Seoul benchmarked for its own projects. It included videos with texts and pictures explaining the different projects and how Seoul adopted their ideas to its own needs. None of the screens were interactive, so viewers had to wait and watch them one by one.

The “Pyongyang” exhibition featured works by 41 artists, none of whom has ever studied or traveled to the capital of North Korea. The only consistency within the works was that they were all in red and blue, which carry no particular meaning except that they are the colors of the Korean national flag.

According to design critic Choi Bum, these kind of design works arise from a mindset that focuses on obvious elements, rather than contemplating the core meaning of design.

“The Seoul Metropolitan Government has been promoting the word design very often,” said Choi. “This is a tendency that’s started from the former mayor of Seoul Oh Se-hoon. I thought it subsided with Mayor Park Won-soon, but it is on the rise again. The design policies pursued by the city government do not focus on what the people of Seoul will actually be living in their lives.

“This could actually be the chance to think about whether the overall design policies in the past worked well, and what the field of culture has achieved in recent times,” said Choi.

Similar problems ail the Seoul Museum of Art’s Seoul Media City Biennale, which received 1.7 billion won from the city government. The exhibition began on Sept. 6 and will run through Nov. 18.

When the media biennale held its preview press conference in April, observers were both intrigued and worried to hear that the biennale switched to a six-person art director panel system. Previously, the biennale only had one art director. The panel included SeMA’s museum director, Choi Hyo-joon, who has since been suspended from his host over allegations that he sexually and verbally harassed museum employees. Choi is accused of sending a female staff member an obscene video.

Another director - Jang Da-ul from Greenpeace - also stepped down from the job for reasons that weren’t disclosed to the press, so the media biennale had to make do without two of its directors.

The theme of this year’s biennale is “Eu Zen,” a term from Greek philosophy that means “living well” or a good life. Contrary to its title, not many works actually deal with how we can live a better life.

Instead, they focus on things that make it difficult for people to enjoy their current life without providing a clear question or solution.

The first work that visitors encounter after entering SeMA’s main Seosomun museum just about sums up what the whole biennale has to offer: a flood of information without explanation.

The puzzling work by Kim Sang-don is made up of two shopping carts modified to look like boats by sticking paper sails covered with handwritten text in them. There are quality works here and there, but their voices fade in the overall chaos.

“It’s a very difficult idea to visualize a collective thought into one,” said art critic Hong Kyung-han. “To have a museum’s director - who takes care of the administrative procedures - as a part of the curating panel was a bad idea. SeMA is Seoul’s only professional institute in the field of art, but rather than taking the time to actually create something on their own, they’re using their authority to sell their brand instead.

“The efforts of the Seoul government are worthwhile, and it may actually be meaningful that they’re taking successful policies from other countries and bringing them to the city,” said Hong.

“But at the moment, their projects fail to reach out to the public, because the works lack content. They’re there for the sake of being there. So for these things to actually work, what we need is to actually put the people at the top of the priorities. If people really don’t understand something, then it’s up to the government to help them see what they’re really doing.”