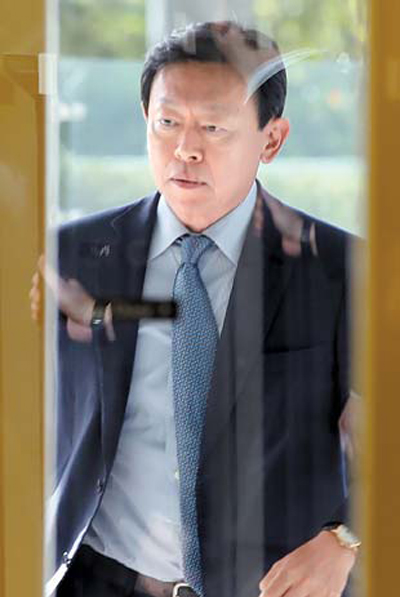 Lotte Group Chairman Shin Dong-bin returned to the office on Monday, getting back to work immediately to resolve issues that were put on hold while he was imprisoned until Oct. 5.

Shin was spotted heading to his office on the 18th floor of Lotte World Tower in Songpa District, southern Seoul, Monday morning without responding to questions from reporters.

The 62-year-old Lotte head’s return to work comes just eight months after he was sentenced to 30 months in prison in February for bribing former President Park Geun-hye. On Friday, the Seoul High Court replaced the prison sentence with four years of probation.

On his first day back, Shin was scheduled to meet with top executives for business updates, including heads of Lotte Group’s four main business units and Vice Chairman Hwang Kag-gyu, who was the de facto leader of the conglomerate during Shin’s vacancy.

“We plan to speed up examinations of business agendas that were put on hold in order to normalize the company’s management,” a Lotte spokesman said.

Shin was a core decision maker for multiple large-scale projects inside the group, and his imprisonment put a halt on many of those plans. Earlier this year, Lotte was looking into investing a total of 11 trillion won ($9.6 billion) in domestic and foreign companies, but the decisions had to be postponed.

Among the large-scale construction projects waiting to restart is Lotte Chemical’s massive oil complex in Indonesia, in which the company planned to invest 4 trillion won by 2023. This was the largest ongoing investment when Shin was detained in February. Lotte finalized procedures in purchasing land for the site last year, but its construction was indefinitely postponed.

Another problem left to untangle is the Lotte World project in Shenyang, China. The ambitious 3-trillion-won plan to build a mall, theme park, hotel and residencies inside one complex was stopped during construction by Chinese officials in November 2016. The apparent reason was safety violations, but it was thought to be part of unofficial sanctions on Lotte for having approved a land swap with the then-government for the deployment of the U.S.-led Thaad antimissile system.

Lotte’s organizational reform also has a chance of moving forward now that Shin is back in control as he can mediate between Korean and Japanese shareholders. Since 2016, Shin has led efforts to cut cross-shareholding among affiliates and rearrange them under Lotte Corporation, a Korean holding company.