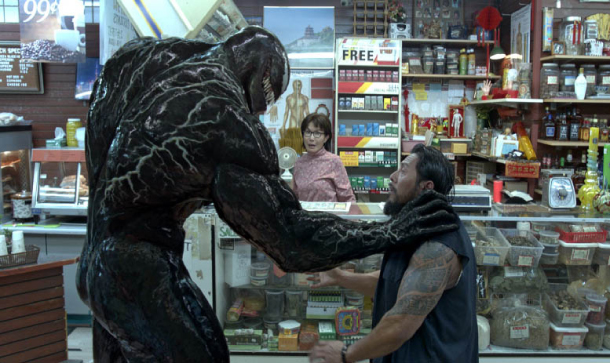 The stand-alone movie centering on Spider-Man nemesis “Venom” soared into the local box office over the weekend, selling 1.16 million tickets at 1,293 screens, according to data provided by the Korean Film Council on Monday. Since it arrived at theaters on Wednesday, the film has so far sold a total of 2.08 million admissions.

This antihero film centers on the disgraced, scandal-ridden reporter Eddie Brock (Hardy), who attempts to revive his career by investigating a sophisticated and unscrupulous corporate survivalist group, the Life Foundation. But after contacting an amorphous extraterrestrial symbiote that bonds with him, Eddie suddenly obtains superpowers.

Hardy caused an uproar among fans when he said before the premiere that “there are like 30 to 40 minutes worth of scenes that aren’t in this movie,” adding that some of the scenes were his favorite ones. The actor later clarified that it was just a misunderstanding.

Coming in second was “Dark Figure of Crime.” The crime flick, starring Ju Ji-hoon and Kim Yoon-seok, sold 996,000 tickets at 1,177 screens during the three days. Having arrived at theaters on the same day as “Venom,” “Dark Figure of Crime” sold a total of 1.61 admissions.

Inspired by a true incident, the film revolves around respected detective Hyung-min (Kim) who is one day told by prisoner Tae-ho (Ju) that he has committed additional murders.

Though nobody else believes Tae-ho’s confession, Hyung-min delves into the case and attempts to uncover the mystery, resulting in a fierce psychological confrontation between the detective and killer.

Whether the film would get a theatrical release was up in the air, as the family of one of the real killer’s victims applied for an injunction last month to ban the screening. But with just a few days to go before the scheduled release date, the family decided to withdraw their case after receiving a sincere apology from the film’s production company.

The Chuseok holiday season movie “The Great Battle,” which tells the story of the fierce battle between Goguryeo (37 B.C. - A.D. 668) General Yang Man-chun (Zo In-sung) of Ansi and his troops and a large army from the Tang Dynasty, dropped two spots to come in third. Since its release on Sept. 19, the mega-budget period flick, which cost 20 billion won ($18 million) has sold a total of 5.13 million tickets. 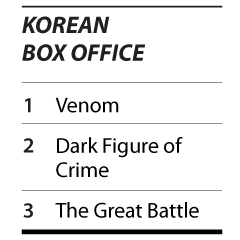 The heartwarming tale of “Christopher Robin” followed, arriving at fourth on its debut weekend.

About a young boy called Christopher Robin who has grown up and left his childhood stuffed animal friends Winnie the Pooh, Tigger and Piglet behind, the movie sold 127,000 tickets from Friday to Sunday.