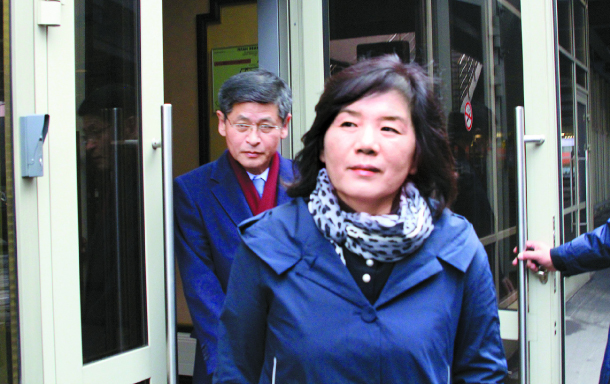 Choe, who previously led the North Korean Foreign Ministry’s North America Bureau, was seen arriving at Sheremetyevo International Airport in northern Moscow at around 3 p.m. on Saturday, after spending Thursday and Friday in Beijing to talk with Chinese diplomats.

Pompeo’s delegation, including Biegun, who was appointed last August, touched down in Pyongyang on Sunday morning and left for Seoul that afternoon, as Choe was in Moscow.

Local analysts suspect the North could have been trying to delay working-level denuclearization talks with Washington by sending its point woman away, while also sending a signal to the United States about its backing from Russia and China.

Choe told reporters at the Russian airport Saturday that she was in the country for a “three-way negotiation.” Russia’s state-run news agency, TASS, reported that the deputy foreign ministers of Russia and North Korea planned to hold bilateral discussions in Moscow yesterday. Today, the deputy foreign ministers from the two countries plus China will have a trilateral meeting, the agency continued, citing an unidentified “representative” of Russia’s diplomatic mission in North Korea.

The discussions, according to TASS, will focus on the denuclearization of the Korean Peninsula and ways to improve South-North Korea relations.

Pompeo apparently wasn’t informed whether Choe would return to Pyongyang in time for them to meet.

On his way to Pyongyang, he told traveling press that his team talked with Choe “all the time” and that she “may be back” in North Korea before he leaves.

Some sources in Seoul’s diplomatic scene said Choe might discuss a North Korea-Russia summit during her stay in Moscow, given that North Korean leader Kim Jong-un and Russian President Vladimir Putin have never met in person. Both countries and China might discuss the easing of international sanctions against North Korea when they meet today.