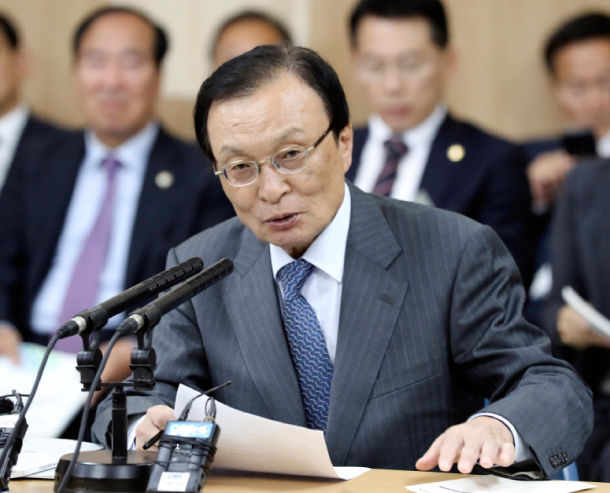 Acrid debate engulfed the National Assembly on Monday after the ruling party chairman said that the country may need to revise the contentious National Security Act while on a trip to Pyongyang.

The remarks were made by Rep. Lee Hae-chan, chairman of the ruling Democratic Party, as he was speaking with South Korean pool reporters in Pyongyang last Friday. He was on a visit to North Korea for a joint ceremony to celebrate the 11th anniversary of a declaration signed at the 2007 summit between then-South Korean President Roh Moo-hyun and former North Korean leader Kim Jong-il.

Lee, who also serves as board of directors of the Roh Moo Hyun Foundation, said the National Assembly should review the National Security Act, among other legal issues, if the Koreas sign a declaration to end the 1950-53 Korean War, which ended in an armistice, not a peace treaty.

Many left-leaning governments have sought to revise the act in the past only to be shut down by conservatives.

Human rights activists often condemn the law as a relic of the Cold War and a restriction on freedom of speech. Those who praise, incite or propagate the activities of an antigovernment organization, for instance, can be punished with up to seven years in prison. Past right-leaning governments have used the law to clamp down on those with pro-North Korean views.

President Moon Jae-in, like his progressive predecessors Kim Dae-jung and Roh Moo-hyun, vowed to revise the law before entering the Blue House. However, he has remained largely silent on the issue since he was elected to president in May 2017. During a presidential debate in April 2017, Moon specifically pointed out that he thought Article 7 of praise and incitement should be “improved.”

A high-level official in the Democratic Party, who spoke with the JoongAng Ilbo on the condition of anonymity on Monday, denied accusations that the party was discussing revisions to the National Security Act with the Blue House. The source stressed that it was a “long-time wish” for the party, one that was passed down from the 1998-2003 Kim Dae-jung and 2003-2008 Roh Moo-hyun administrations.

Lee Ju-young, a lawmaker of the conservative main opposition Liberty Korea Party (LKP) who also serves as vice speaker of the National Assembly, said Monday in a statement that Democratic Party Chairman Lee was “really pathetic” to have mentioned the abolishment of the National Security Law in front of North Korean officials. He added that he wasn’t sure whether Lee was sane when he made the comment.

Around an hour and a half later, Rep. Hong Ihk-pyo, the chief spokesman of the Democratic Party, said he felt “regretful” about Rep. Lee Ju-young’s remarks, saying they were laden with defamation and false information.

“I’m not sure whether he still sees himself as a pro-Park heavyweight,” Hong said, taunting Lee Ju-young’s clout in the former Park Geun-hye administration, when he was a core member of the pro-Park faction in the National Assembly.

Rep. Kim Sung-tae, the floor leader of the LKP, said he wasn’t sure which country’s ruling party that Lee Hae-chan was speaking for when he made the remark in Pyongyang. Kim Byung-joon, the LKP’s interim leader, said it was as if the Democratic Party chairman was “reporting to his boss” when he told top North Korean parliamentary officials that he would never lose the Blue House to the opposition party while he is still alive.

The center-right Bareunmirae Party also expressed ire at Lee’s statements. “He was making a big mistake when he referred to the National Security Act in North Korea,” said Rep. Ha Tae-keung on a local radio show Monday. Ha urged Lee to apologize for his comments.