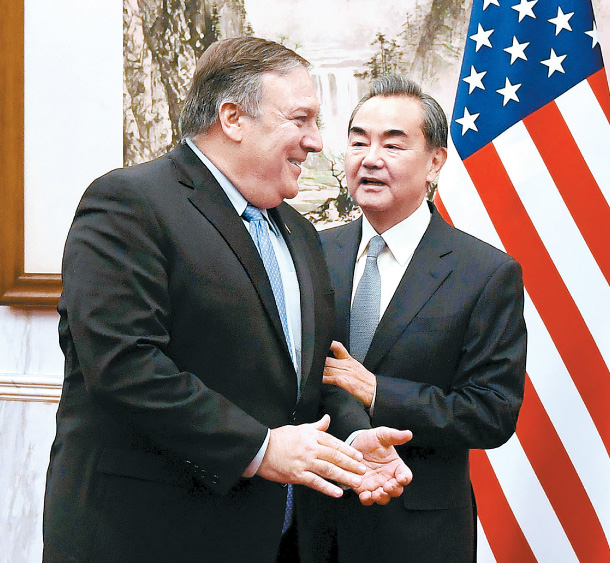 The U.S. State Department reported in a statement that Kim had “invited inspectors” to visit the Punggye-ri testing site, where all of North Korea’s six underground nuclear tests took place starting from 2006, to confirm that “it has been irreversibly dismantled.”

In May, North Korea invited journalists - but not nuclear experts - to witness the supposed blowing up of the tunnels.

Pompeo and Kim called on their “respective working-level teams to meet soon to intensify discussions on the key remaining issues to deliver on the Singapore Summit Joint Statement,” the U.S. statement read, referring to a joint North-U.S. declaration signed by North Korean leader Kim and U.S. President Donald Trump at their first summit on June 12 where the two agreed on the “complete denuclearization of the Korean Peninsula.”

While Kim was said to have invited U.S. inspectors to the Punggye-ri testing site, there was no mention of whether they would be allowed to inspect the North’s Yongbyon nuclear complex or its Tongchang-ri missile engine testing site.

In the Pyongyang Declaration, produced at Kim’s third summit meeting with South Korean President Moon Jae-in in Pyongyang last month, Kim agreed to “permanently dismantle” the Tongchang-ri engine site and launch platform there “under the observation of experts from relevant countries.”

Kim and Moon also stipulated that the North could proceed to permanently dismantle its Yongbyon nuclear complex “as the United States takes corresponding measures in accordance with the spirit of the June 12 US-DPRK Joint Statement,” using an acronym for the North’s official name, the Democratic People’s Republic of Korea.

While no mention was made of inspections of the Tongchang-ri missile engine test site in the State Department statement, it is possible Pompeo and Kim agreed during their one-day meeting that U.S. inspectors would visit it to verify the dismantling.

North Korean leader Kim has expressed disappointment over what he said was the dubious attitude of the international community over his denuclearization promise in spite of his demolition of the Punggye-ri nuclear testing site.

During a meeting with Chung Eui-yong, President Moon’s national security adviser, on Sept. 5 in Pyongyang, Kim said his country would never be able to conduct another nuclear test since two-thirds of the underground tunnels at the Punggye-ri nuclear testing site had been demolished. Despite Kim’s remarks, the international community has been suspicious of the North’s genuineness about denuclearization for a number of reasons. First, because no nuclear experts were invited to witness the demolition in April. Second, skeptics say the North has no need for such tests anymore because it has already mastered nuclear technology from its six nuclear tests over an 11-year period.

During a meeting with reporters in Seoul Monday before leaving for Beijing, Pompeo said U.S. inspectors would make it to the North as soon as the two sides agree on logistics, according to a report by the Reuters.

“There’s a lot of logistics that will be required to execute that,” he was quoted as saying.

The U.S. State Department statement also reported that Pompeo and Kim, who spent over five hours together in the North Korean capital, discussed an upcoming second summit between Kim and Trump and “refined options for the location and date.”

Kim Yong-chol, vice chairman of the Central Committee of the North’s ruling Workers’ Party, who has been Pompeo’s interlocutor in ongoing denuclearization talks, did not join the talks.

The North Korean media on Monday welcomed the Pompeo-Kim talks held a day before.

In an English dispatch by the Korean Central News Agency (KCNA), the North reported North Korean leader Kim “expressed his will and conviction that a great progress would surely be made in solving the issues of utmost concern of the world and in attaining the goal set forth at the last talks with the projected second DPRK-U.S. summit talks as an occasion.”

Kim “expressed his gratitude to President Trump for making sincere effort to this end,” it said.

The North went on to note the two sides agreed to start working-level negotiations to prepare for a second Kim-Trump summit “as early as possible.”