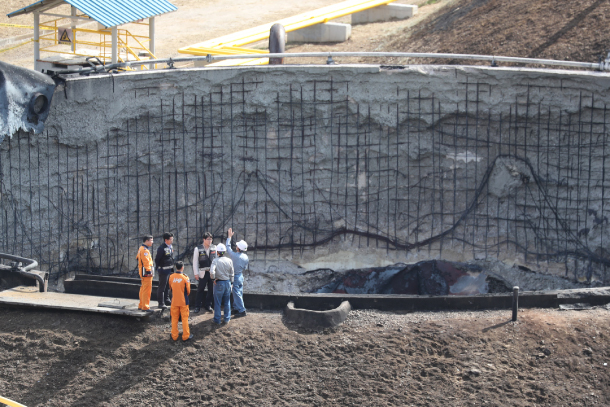 Firefighters from the Goyang Fire Department examine a burnt-out gasoline tank on Monday in Goyang, Gyeonggi, to find the cause of the fire that ripped through it. [YONHAP]

A massive fire that broke out Sunday morning after a gasoline tank exploded at a storage station in Goyang, Gyeonggi, was finally put out at 3:58 a.m on Monday, 17 hours after it started.

The Goyang Fire Department said it proceeded with caution to prevent the fire from spreading to other gasoline tanks, which is why it took a long time to extinguish the fire.

“Due to the number of hazardous components about the situation, we could only start tackling the situation after all the oil in the gasoline tank was completely used up,” said a spokesperson from the fire department.

The fire department managed to extract the remaining gasoline from the tank on fire and moved it to another tank while using fire extinguishers to put out the flames.

Officials later estimated that it would have taken over one month for the 4.4 million liters (1.2 million gallons) of gasoline in the tank, owned by Daehan Oil Pipeline Corporation, to completely burn.

The oil burned in the fire was estimated to be worth 4.3 billion won ($3.8 million). There were no casualties reported.

At 4:03 a.m, the fire department lifted the highest-level fire emergency warning it issued on Sunday.

The Goyang Fire and Police Department and Daehan Oil Pipeline Corporation started a field inspection at 2:00 p.m on Monday.

One factor they said they would look into is dynamite explosions on a highway construction site 500 meters (1,640 feet) away, two hours before the fire started.

“We are looking into the possibility that the dynamite explosion might have set off vibrations that affected the underground unit or embers of fire that might have set fire to the oil mist that collected in the tanks,” said a spokesperson from the fire department.

Many area residents, meanwhile, are enraged at the lack of information they received from the government about the disaster.

A government issued a warning to residents living near the fire in Goyang at 12:35 p.m on Sunday. When the smoke from the fire drifted near Mapo District in western Seoul, residents received the same warning. Some recipients of the warning text were disappointed in the lack of information provided, however.

“Whenever a disaster occurs, the government always tells us where it occurred and how disastrous it is, but does not elaborate on how to react in a situation like such,” said a nearby resident.